Ghosts of the Tsunami - by Richard Lloyd Parry (Hardcover) 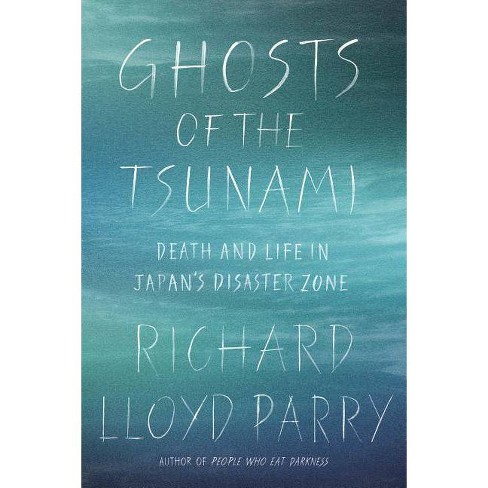 The definitive account of what happened, why, and above all how it felt, when catastrophe hit Japan--by the Japan correspondent of The Times (London) and author of People Who Eat Darkness

Named one of the best books of 2017 by The Guardian, NPR, GQ, The Economist, Bookforum, Amazon, and Lit Hub

The definitive account of what happened, why, and above all how it felt, when catastrophe hit Japan--by the Japan correspondent of The Times (London) and author of People Who Eat Darkness

On March 11, 2011, a powerful earthquake sent a 120-foot-high tsunami smashing into the coast of northeast Japan. By the time the sea retreated, more than eighteen thousand people had been crushed, burned to death, or drowned. It was Japan's greatest single loss of life since the atomic bombing of Nagasaki. It set off a national crisis and the meltdown of a nuclear power plant. And even after the immediate emergency had abated, the trauma of the disaster continued to express itself in bizarre and mysterious ways. Richard Lloyd Parry, an award-winning foreign correspondent, lived through the earthquake in Tokyo and spent six years reporting from the disaster zone. There he encountered stories of ghosts and hauntings, and met a priest who exorcised the spirits of the dead. And he found himself drawn back again and again to a village that had suffered the greatest loss of all, a community tormented by unbearable mysteries of its own. What really happened to the local children as they waited in the schoolyard in the moments before the tsunami? Why did their teachers not evacuate them to safety? And why was the unbearable truth being so stubbornly covered up? Ghosts of the Tsunami is a soon-to-be classic intimate account of an epic tragedy, told through the accounts of those who lived through it. It tells the story of how a nation faced a catastrophe, and the struggle to find consolation in the ruins.

An eerie, brushstroked evocation . . . A strikingly vivid, even visceral writer, Lloyd Parry sweeps away distractions . . . to offer tightly focused and consuming human stories . . . Lloyd Parry is uncommonly sensitive to all such spirits, and in the tsunami he has found a horrifying metaphor for those subliminal forces that swirl underneath the manicured surfaces of Japan . . . The ghosts that hover just above his charged and elemental pages are a reminder of how much this land of order remains ruled by things that can't be seen. --Pico Iyer, The New York Times Book Review

A lively and nuanced narrative by the British journalist Richard Lloyd Parry, the longtime and widely respected correspondent in Tokyo for the London Times. Though in part he presents vivid accounts of what was a very complex event, with this book he wisely stands back . . . to consider the essence of the story . . . Heartbreaking. --Simon Winchester, The New York Review of Books Powerful . . . Lloyd Parry's account is truly haunting, and remains etched in the brain and heart long after the book is over. --Lisa Levy, New Republic Richard Lloyd Parry wrote People Who Eat Darkness, easily one of the best works of true crime in the past decade . . . [Ghosts of the Tsunami is] a stunning portrait of devastation and its aftermath. -Kevin Nguyen, GQ A wrenching chronicle of a disaster that, six years later, still seems incomprehensible . . . Any writer could compile a laundry list of the horrors that come in the wake of a disaster; Lloyd Parry's book is not that . . . Lloyd Parry writes about the survivors with sensitivity and a rare kind of empathy; he resists the urge to distance himself from the pain in an attempt at emotional self-preservation. -Michael Schaub, NPR.org

Remarkably written and reported . . . a spellbinding book that is well worth contemplating in an era marked by climate change and natural disaster. -Kathleen Rooney, The Chicago Tribune Vivid, suspenseful . . . [Lloyd Parry] re-creates the tragic events in a cinematic style reminiscent of Truman Capote's In Cold Blood . . . There's a harrowing intimacy here, as he brings us into families senseless with grief, the desire for a justice that eludes them . . . Lloyd Parry's elegant, clear-eyed prose allows him to circle ever closer to the heart of Okawa's mystery . . . Part detective story, part cultural history, part dirge, Ghosts of the Tsunami probes the scars of loss and the persistence of courage in the face of unspeakable disaster. --Hamilton Cain, Minneapolis Star Tribune [Lloyd Parry's] writing is always graceful and filled with compassion. --Adam Hochschild, The American Scholar [The book's] testimonies are almost unbearably moving . . . In an understated way, Ghosts of the Tsunami is not only a vivid, heartfelt description of the disaster, but a subtle portrait of the Japanese nation. --Craig Brown, The Mail on Sunday "The stories that Lloyd Parry gives voice to are not only deeply personal but . . . accompanied with essential historical and cultural context that enable the reader to understand the roles of death, grief, and responsibility in Japanese culture--and why some survivors may always remain haunted." --Amanda Winterroth, Booklist (starred review) "A brilliant, unflinching account . . . Singular and powerfully strange . . . It is hard to imagine a more insightful account of mass grief and its terrible processes. This book is a future classic of disaster journalism, up there with John Hersey's Hiroshima." --Rachel Cooke, The Guardian "Lloyd Parry combines an analytical dissection of the disaster in all its ramifying web of detail with a novelist's deft touch for characterization . . . Heartrending . . . it will remain as documentation to the inestimable power of nature and the pitiful frailty of our own." --Roger Pulvers, The Japan Times Pensive travels in the wake of one of the world's most devastating recent disasters, the Tohoku earthquake of 2011 . . . The author's narrative is appropriately haunted and haunting . . . A sobering and compelling narrative of calamity. -Kirkus Reviews

Richard Lloyd Parry is the Asia editor and Tokyo bureau chief of The Times (London) and the author of In the Time of Madness and People Who Eat Darkness.
If the item details above aren’t accurate or complete, we want to know about it. Report incorrect product info.