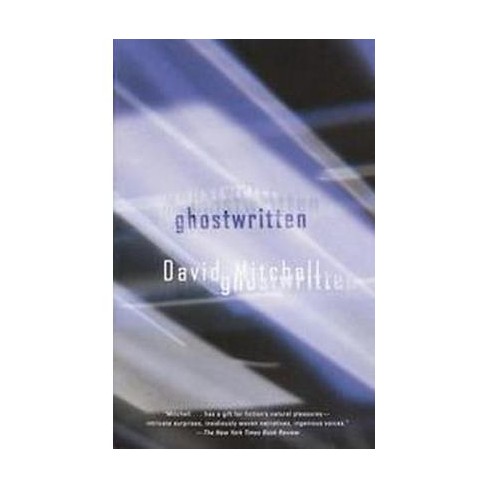 A sensation upon its publication in England, "Ghostwritten"--now in paperback--is the story of nine strangers in nine countries whose lives are entwined in a strange chain of circumstance.

By the New York Times bestselling author of The Bone Clocks and Cloud Atlas
A gallery attendant at the Hermitage. A young jazz buff in Tokyo. A crooked British lawyer in Hong Kong. A disc jockey in Manhattan. A physicist in Ireland. An elderly woman running a tea shack in rural China. A cult-controlled terrorist in Okinawa. A musician in London. A transmigrating spirit in Mongolia. What is the common thread of coincidence or destiny that connects the lives of these nine souls in nine far-flung countries, stretching across the globe from east to west? What pattern do their linked fates form through time and space? A writer of pyrotechnic virtuosity and profound compassion, a mind to which nothing human is alien, David Mitchell spins genres, cultures, and ideas like gossamer threads around and through these nine linked stories. Many forces bind these lives, but at root all involve the same universal longing for connection and transcendence, an axis of commonality that leads in two directions--to creation and to destruction. In the end, as lives converge with a fearful symmetry, Ghostwritten comes full circle, to a point at which a familiar idea--that whether the planet is vast or small is merely a matter of perspective--strikes home with the force of a new revelation. It marks the debut of a writer of astonishing gifts.

"A brave new book for a brave new world--fueled by a brilliant imagination and buoyed by beautifully descriptive writing."--USA Today

"Elegantly composed, gracefully plotted and full of humor."--Los Angeles Times "Unlike so many of the chroniclers of the twenty-first-century pastiche--an industry dominated by ad men and feature-writers, not novelists--Mitchell has set out to craft actual characters, not archetypes. The result is a dazzling piece of work."--The Washington Post "Mitchell deftly sketches each character to such a compelling extent that you become totally immersed. . . . His nine characters and their random but fateful interactions provide a playful, suspenseful foray into our ever-shrinking world."--Entertainment Weekly "An intricately assembled Fabergé egg of a novel, full of sly and sometimes beautiful surprises. . . . In an era in which much literary fiction is characterized by unearned ironies and glib cynicism, it's hard not to be impressed by the humanism that animates Mitchell's book."--New York

"Gripping and innovative. . . . [Ghostwritten serves] to illustrate the strange interconnectivity of the modern world and the improvisatory nature of fate."--The New York Times "A daring novel, uniquely structured and just as uniquely compelling."--The Denver Post

David Mitchell is the award-winning and bestselling author of Slade House, The Bone Clocks, The Thousand Autumns of Jacob de Zoet, Black Swan Green, Cloud Atlas, Number9Dream, andGhostwritten. Twice shortlisted for the Man Booker Prize, Mitchell was named one of the 100 most influential people in the world by Time in 2007. With KA Yoshida, Mitchell translated from the Japanese the internationally bestselling memoir The Reason I Jump. He lives in Ireland with his wife and two children.
If the item details above aren’t accurate or complete, we want to know about it. Report incorrect product info.