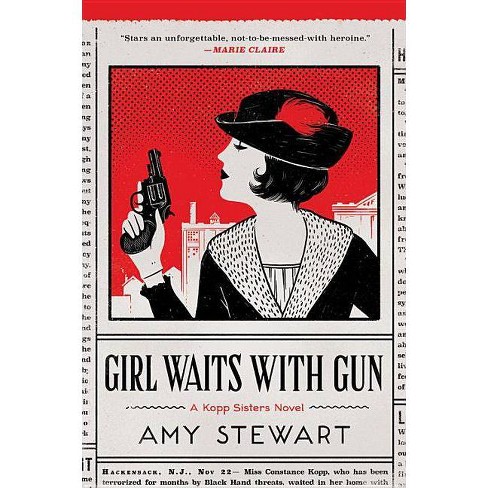 "Well-written with sharply drawn characters and the occasional plot twist, Girl Waits With Gun is an absorbing throwback to a bygone era. It's a solid book, and Stewart's helpful notes allow readers to appreciate just how much of the tale is true."--Associated Press

Amy Stewart's Girl Waits with Gun is among the most appealing crime novels recently published. - See more at: http: //thelifesentence.net/book/the-redoubtable-constance-kopp/#sthash.ZLv00RGf.dpuf"A feel-good-movie appeal...Girl Waits with Gun is smart, funny, and suspenseful. Beyond entertaining us with a rollicking plot and colorful characters, Stewart allows us to witness the personal transformation of an extraordinary woman forgotten by history. It's a privilege to meet Constance Kopp in the pages of Stewart's book."--The Life Sentence "A sheer delight to read and based on actual events, this debut historical mystery packs the unexpected, the unconventional, and a serendipitous humor into every chapter. Details from the historical record are accurately portrayed by villains and good guys alike, and readers will cross their fingers for the further adventures of Constance and Sheriff Heath. For fans of the Phryne Fisher series by Kerry Greenwood, and the Mary Russell and Sherlock Holmes mysteries by Laurie R. King."--Booklist, starred "Hardened criminals are no match for pistol-packing spinster Constance Kopp and her redoubtable sisters in this hilarious and exciting period drama by bestseller Stewart (The Drunken Botanist). This is an elegant tale of suspense, mystery, and wry humor...A surprising Kopp family secret, a kidnapped baby, and other twists consistently ratchet up the stakes throughout, resulting in an exhilarating yarn."--Publishers Weekly, starred "Stewart crafts a solid, absorbing novel based on real-life events--though they're unusual enough to seem invented. Stewart deftly tangles and then unwinds a complicated plot with nice period detail...More adventures involving gutsy Constance, quietly determined Sheriff Heath, and a lively cast of supporting characters would be most welcome."--Kirkus, starred "In her engaging first novel, Stewart (The Drunken Botanist) draws from the true story of the Kopp sisters (Constance became one of the country's first female deputy sheriffs) and creates a welcome addition to the genre of the unconventional female sleuth. Colorful, well-drawn characters come to life on the page, and historical details are woven tightly into the narrative. The satisfying conclusion sets up an opening for future Constance Kopp novels. VERDICT: Historical fiction fans and followers of Rhys Bowen's 'Molly Murphy' mysteries and Victoria Thompson's 'Gaslight Mystery' series will delight in the eccentric and feisty Kopp women."--Library Journal, starred "This is my favorite find for September. Based on a real trial in 1915, it's the story of three sisters who run afoul of a thuggish factory owner and then are terrorized in their farmstead.Author Amy Stewart fleshes out the brief facts available with charming characters and lavish period detail."--The News & Observer "A remarkably fresh novel, the first in what is expected to be a series featuring proto-badass Constance, who in real life went on to become one of the first female deputy sheriffs in America...[A] witty, often wickedly funny mystery...Stewart not only captures America at the dawn of modernity, but at a transformational moment for American women...In Stewart's hands, Constance Kopp embodies that transformation."--NJ.com


"Stewart describes each scene in vibrant detail. Each sister feels fully developed and I feel as if I know them all. Their fierce independence and quirky hobbies, which include training carrier pigeons, endeared them to me. The stunningly crafted plot unfolds as Stewart slowly tells their story. This is one of those books I escaped into; well, escape might be the wrong word. It's more like I get to step into another life. Truly great fiction like Girl Waits with Gun feels just as authentic as my own life. It's like such stories are self-contained worlds waiting to be discovered. This book is witty, funny, intriguing and suspenseful. In short, there's something for just about everyone in it. I hope you get a chance to explore this world for yourself."--YamikaHerald.com

"Girl Waits with Gun is undoubtedly the most scintillating historical novel ever written about a trio of sisters in pre-World War I New Jersey...Stewart shows a real feeling for the social constraints and physical discomforts of life in 1914...Stewart deftly reconstructs an era when newfangled technologies such as cars, telephones, and moving pictures existed side by side with horse-drawn carriages and oil lamps, when suffragettes were marching for the right to vote but mostly still subservient to their husbands, or in the case of single women, their brothers or other relatives."--OregonLive.com "A story that begins with one simple goal -- the Kopp sisters want to be reimbursed $50 to repair Kaufman's damage to their buggy -- and spins out into an epic yarn dealing with women's rights, class conflict and the appointment of one of the country's first deputy sheriffs."--Ashbury Park Press "A period thriller that rivals any other historical-based suspense novel. Stewart weaves an amazingly delightful tale, one I was hard pressed to put down. This novel should be listed for debut novel awards."--Suspense Magazine "A smart, romping adventure, featuring some of the most memorable and powerful female characters I've seen in print for a long time. I loved every page as I followed the Kopp sisters through a too-good-to-be-true (but mostly true!) tale of violence, courage, stubbornness, and resourcefulness."--Elizabeth Gilbert "How could you not fall in love with a book about one of the first female deputy sheriffs and her sisters--especially when it's written by the enthralling Amy Stewart? Full of long-held secrets, kicked-up dust, simmering danger, and oh yes, that gun--this gritty romp illuminates one of history's strongest women with a hold-your-breath panache."--Caroline Leavitt, New York Times bestselling author of Is This Tomorrow and Pictures of You "Girl Waits With Gun makes excellent use of history to put a fresh spin on classic cop-and-crook types. Amy Stewart's true-life protagonist is a 'rough and tumble' version of the early 20th century's New Woman. She is witty, sharply-drawn, and suffers no fools!"--Suzanne Rindell, author of The Other Typist "Yowza! Amy Stewart's debut boasts pomaded gangsters, pistol-packin' dames, kidnappings, shots in the dark, and everything from Girls Gone Wrong to carrier pigeons finding their way home. You might want to stay up all night reading, you might want to lie down on your fainting couch with a cool cloth on your forehead. Either way, you'll have the time of your life." --Robert Goolrick, New York Times bestselling author of A Reliable Wife "Girl Waits with Gun is fresh, funny and utterly compelling-- and Constance Kopp and her sisters are not just great investigators, but completely original women. It was a blast from start to finish and I can't wait to see what Deputy Kopp gets up to next."-- Lisa Lutz, author of The Spellman Files, How to Start a Fire, and others "Amy Stewart has crafted the best kind of historical novel; she uncovers an intriguing, all-but-forgotten historical nugget and spins it into a wildly entertaining tale with an engaging, tough-minded heroine. Girl Waits With Gun hits the bulls-eye."--Daniel Stashower, author of The Hour of Peril: The Secret Plot to Murder Lincoln Before the Civil War "Amy Stewart's debut novel Girl Waits With Gun is an irresistible and thoroughly enjoyable book, a suspenseful historical mystery spiced with marvelous characters, wit, and humor. Is it too soon to beg for a sequel?" --Jennifer Chiaverini, author of Mrs. Grant and Madame Jule "Engaging, lively, and substantive, Girl Waits with Gun is a perfect mystery, and the Kopp sisters are my new best friends. Amy Stewart writes about crime as well as she writes about plants and poisons. I loved this book, and will be first in line for the next installment."--Sara Gran, author of Claire DeWitt and the Bohemian Highway
If the item details above aren’t accurate or complete, we want to know about it. Report incorrect product info.