Girls on the Line - by Jennie Liu (Hardcover) 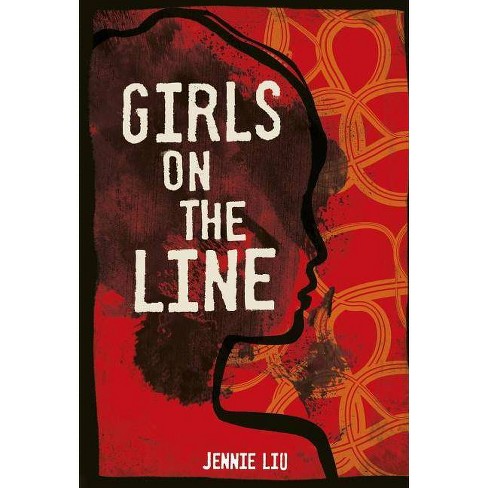 Raised in an Chinese orphanage until they aged out at 16, Luli and Yun work together in a factory until Yun, who is pregnant, disappears and Luli must confront the dangers of the outside world to find her. Includes facts about China's One-Child Policy and its effects.

Luli has just turned sixteen and finally aged out of the orphanage where she's spent the last eight years. Her friend Yun has promised to help her get work.

Yun loves the independence that her factory job brings her. For the first time in her life she has her own money and can get the things she wants: nice clothes, a cell phone...and Yong, her new boyfriend.

There are rumors about Yong, though. Some people say he's a bride trafficker: romancing young women only to kidnap them and sell them off to bachelors in the countryside. Yun doesn't believe it. But then she discovers she's pregnant--the same day she gets fired from her job. If she can't scrape together enough money to terminate the pregnancy, she'll face a huge fine for having an unauthorized child.

Luli wants to help her friend, but she's worried about what Yong might do...especially when Yun disappears.

[E]xplores a moment of contemporary history and a culture that is underrepresented in YA realistic fiction.--starred, School Library Journal

Both poignant and agonizing, Girls on the Line is a must read.--starred, Foreword Reviews

A powerful view into the struggles faced by young women in a world that doesn't value them--and where they must find strength within themselves and each other.--Joanne O'Sullivan, author of Between Two Skies

In 2009 Gujiao, China, teens Luli and Yun are 'girls on the line.' They labor long, mind-numbing hours at an electronics factory while living with up to eight other people in a dormitory room. Though the young women were raised like sisters in the same grim orphanage, they couldn't be more different. Outgoing Yun loves the relative freedom that the job provides--making her own money and going out to clubs--while shy Luli would rather save her money and sleep after her shift is over. When Yun discovers she is pregnant (with an 'unauthorized' child) by her shady boyfriend Yong, who is a suspected bride trafficker, Luli is forced to set her timidity aside in order to stand up for her friend. As the girls navigate their severely limited options while trying to avoid being fired, fined, or kidnapped, readers are given a perceptive, sobering glimpse into China's oppressive economic bureaucracy. Liu's candid prose and matter-of-fact tone, related in alternating first-person chapters, heighten the horror of the harrowing conditions many Chinese girls and women are subjected to on a daily basis. Liu elucidates in a closing author's note why these situations are largely a result of China's One-Child Policy. Pass this to readers of Patricia McCormick's Sold (rev. 9/06) and Peggy Kern's Little Peach.--The Horn Book Magazine

It is 2009 in the city of Gujiao, China: 16-year-old Luli and 17-year-old Yun, best friends, have aged out of their orphanage and are now enjoying the exhilarating independence of factory work. Their wages and dorm life offer an exciting taste of freedom, as does Yun's handsome new boyfriend, Yong. Yun's jealous ex-boyfriend says that Yong is illegally trafficking brides to the countryside, but Yun refuses to believe it. When she becomes pregnant, however, Yun, Luli, and Yong each have their own agendas, and their decisions and deceits result in a compelling, action-packed chain of events. During this time, China's One-Child Policy made unmarried and multiple pregnancies illegal for most: Mothers would be fined for unauthorized pregnancies, and without an official permit would not even be allowed into a hospital to give birth. Told in the first person from the two girls' alternating points of view, readers will be drawn into their emotional lives through sharing both their quiet, day-to-day routines and the moments of high drama, all of which are direct results of policies that trapped ordinary citizens and forced them into making terrible decisions. An affecting and original thrill ride highlighting the bond between two friends put in a horrible situation by actual Chinese government policies.--Kirkus Reviews

Jennie Liu's Girls on the Line is a gut-wrenching story of sisterhood and perseverance.

Early 2000s China, in the throes of family planning policies and massive industrialization, isn't kind to orphaned girls like Luli and Yun, who are trapped in a system that controls their bodies politically, physically, and economically. Still, theirs are extraordinary lives.

As children, Luli and Yun band together. Life is debilitating in their orphanage, but their friendship lasts even when they age out of the government childcare system. They find work at an electronics factory doing tiring, daylong work. Eking out this hard living rewards them with independence and some modicum of comfort . . . until Yun discovers that she's pregnant.

China's laws prohibit unwed girls from giving birth, so Yun has only one true option: abortion. But before she can make any decisions, she vanishes. Luli struggles to find her friend before it is too late, concerned that she might have gotten into trouble with the boy who got her pregnant: a bride trafficker, Yong.

Told in alternating points of view, the book's language is clear and emotive. Yun and Luli are deep and complex. The sheer exploitation that they must endure at the hands of traffickers, factory bosses, and government regulations is brutal, but their sometimes rocky relationship offers a glimmer of hope and sisterhood in the midst of trauma.

The Chinese setting is established seamlessly; the nation's laws, social mores, and other nuances come through. Rife with tension, interweaving threads, and moving and startling moments, the story captivates and speaks to a political situation that still struggles with the aftermath of regulatory policies.

Both poignant and agonizing, Girls on the Line is a must read.--starred, Foreword Reviews

Sixteen-year-old Luli has just aged out of the Chinese orphanage where she's been living for eight years since her grandfather died. Her fellow orphan and friend Yun, who left the orphanage a year earlier, gets Luli a job at the electronics factory where she works. In alternating chapters, the girls relate the dramatic story of Yun's unplanned pregnancy, her human trafficker boyfriend's plans to sell their baby, and Luli's loyalty to Yun despite Yun's growing coldness. Liu's debut novel, based on her immigrant parents' past and her own trips to China, is set in 2009 and offers an insider's view of the very real plight of young women affected by China's one-child policy. The unusual setting and focus provide a much-needed look at the people who produce the goods we rely on worldwide and the hardships they face. Liu provides an authentic voice and portrayal of young Chinese women in difficult situations. Readers will learn much from this absorbing and realistic tale.--Booklist

The author explores China's One Child Policy and its complex repercussions in this compelling dual narrative. Luli and Yun grew up together in an orphanage and find themselves in the grind of factory work as they seek financial and social independence. Shy Luli observes as Yun pursues a relationship with Yong, who self-describes as a 'bride collector.' When Yun becomes pregnant and gets fired from the factory, her world closes in with the consequences of bearing a child out of wedlock in 2009 China. Yun is self-aware enough to know she cannot face her problem alone, but her survival-mode mentality leads her away from nurturing Luli. Yong's credibility crumbles, but Yun is so embedded in his world, she needs Luli and others to navigate each step of her journey. Liu shifts narration creatively along plot points and uses a matter-of-fact tone to immerse readers in the unfolding action. The characters are realistic products of their experiences--they are flawed, accessible, and multidimensional. This novel explores a moment of contemporary history and a culture that is underrepresented in YA realistic fiction. Fans of Audacity by Melanie Crowder or Out of Darkness by Ashley Hope Pérez will gobble this up. VERDICT Recommended purchase, especially for YA collections serving older teens or new adults.--starred, School Library Journal

This story will pull on your heart in a hundred different ways. I found myself so worried for Yun and Luli, and the difficult choices they had to make in order to survive. It was beautiful to watch their friendship evolve, as each girl lost, and then found, her own strength, voice, and sense of self amid such challenging circumstances. An authentic, gripping read from beginning to end!--Ingrid Palmer, author of All Out of Pretty