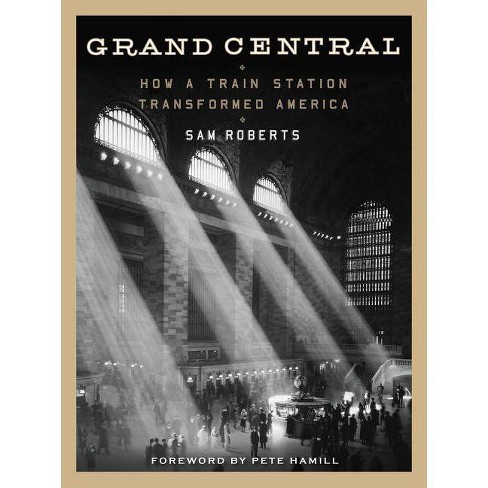 Explores the rich history, anecdotes, and inside stories of one of the world's key cultural destinations, which is credited with revolutionizing urban as well as suburban development everywhere.

A rich, illustrated - and entertaining -- history of the iconic Grand Central Terminal, from one of New York City's favorite writers, just in time to celebrate the train station's 100th fabulous anniversary. In the winter of 1913, Grand Central Station was officially opened and immediately became one of the most beautiful and recognizable Manhattan landmarks. In this celebration of the one hundred year old terminal, Sam Roberts of The New York Times looks back at Grand Central's conception, amazing history, and the far-reaching cultural effects of the station that continues to amaze tourists and shuttle busy commuters. Along the way, Roberts will explore how the Manhattan transit hub truly foreshadowed the evolution of suburban expansion in the country, and fostered the nation's westward expansion and growth via the railroad. Featuring quirky anecdotes and behind-the-scenes information, this book will allow readers to peek into the secret and unseen areas of Grand Central -- from the tunnels, to the command center, to the hidden passageways. With stories about everything from the famous movies that have used Grand Central as a location to the celestial ceiling in the main lobby (including its stunning mistake) to the homeless denizens who reside in the building's catacombs, this is a fascinating and, exciting look at a true American institution.

"A wonderful volume for New York City buffs or railroad aficionados, Roberts closes with discussions of some of the terminal's quirks and mysteries like the ubiquitous decorative acorns, the secret staircase, and various secret underground locations."
--Publishers Weekly

"Sam Roberts' book integrates a historical perspective with contemporary storytelling. This compelling narrative invites the reader into an immersive world of Grand Central that is personal, historically rich, and peppered with engaging anecdotes."
--American Institute of Architects

"This well-done piece of urban history will appeal to both railroad enthusiasts and general readers."
--Booklist

Sam Roberts is an urban affairs correspondent and Metro Matters columnist for the New York Times and, as such, has become something of the face and voice for the city at large. He is the author of numerous books, including The Brother: The Untold Story of the Rosenberg Case. Sam is frequently heard on NPR.
If the item details above aren’t accurate or complete, we want to know about it. Report incorrect product info.