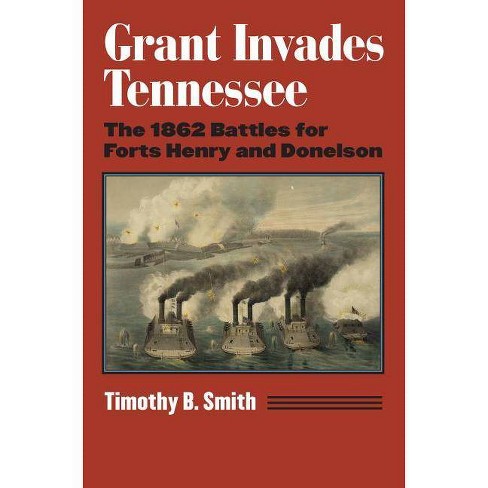 $24.49
0 out of 5 stars with 0 reviews
be the first!be the first! ratings
Shipping
Free standard shipping with RedCard
Help us improve this page

"Many historians have regarded the fall of Confederate Forts Henry and Donelson in February 1862 as the real "turning point" of the Civil War, and with good cause. By taking them, U. S. Grant opened up the Tennessee and Cumberland Rivers as arteries of invasion into the deepest heartland of the South. Using them, he and his generals began carving the Confederacy into more easily digested pieces until they all but devoured everything between the Appalachians and the Mississippi. Timothy B. Smith's outstanding new book is far and away the best and most detailed study to date, backed by intimidatingly deep research, and informed by mature judgments. It must instantly become an indispensable source for scholars, and an engrossing narrative for armchair historians."--William C. Davis is most recently author of Crucible of Command: Ulysses S. Grant and Robert E. Lee-the War they Fought, the Peace they Forged

"Victories at Fort Henry and Donelson in February 1862 were the first major steps on the North's long, hard road to victory in the Western theater. They also demonstrated how effective properly executed joint operations could be during the Civil War and served to catapult an obscure, but eminently able general named Ulysses S. Grant to prominence. In Grant Invades Tennessee, Timothy B. Smith provides a superb account of the operations that determined the fate of Henry and Donelson, one that is as effective in chronicling the harsh conditions the men in the ranks endured during the campaign as it is in explaining the command decisions that shaped its outcome. Compellingly written and thoroughly researched, this is not only the new standard study of Fort Henry and Fort Donelson, but a work that belongs on the bookshelf of every Civil War enthusiast." --Ethan S. Rafuse, author of Robert E. Lee and the Fall of the Confederacy, 1863-1865

"Timothy Smith delivers another outstanding work on the Civil War in the West. Vast in its resources and beautifully written, this work makes an excellent case that the western theater produced far more lasting change than previously thought. The Confederates never overcame the losses at Forts Henry and Donelson and Smith's fast-paced narrative provides an outstanding tactical examination of how Ulysses S. Grant finally arrived at 'Unconditional and Immediate Surrender'. This is battle history at its finest."--Stephen Engle, author of Don Carlos Buell: Most Promising of All

"Tim Smith follows his definitive book on Shiloh with this seminal study on Forts Henry and Donelson and shows convincingly why these battles were so crucial to the outcome of the Civil War."--John F. Marszalek, Giles Distinguished Professor Emeritus of History and Executive Director of the Ulysses S. Grant Association's Grant Presidential Library, Mississippi State University.

"Once more Timothy Smith has provided students of the Civil War with a detailed recounting of a pivotal Union victory in the Western Theater. This volume rescues the capture of Fort Henry from obscurity and reminds us that this campaign not only resulted in the surrender of a large number of Confederates to a new national hero, but that it also opened the way for future major offensives that would do much to secure Union victory. A must read for anyone interested in this Yankee triumph and the rise of Ulysses S. Grant."--Brooks D. Simpson, co-author of Victors in Blue: How Union Generals Fought the Confederates, Battled Each Other, and Won the Civil War