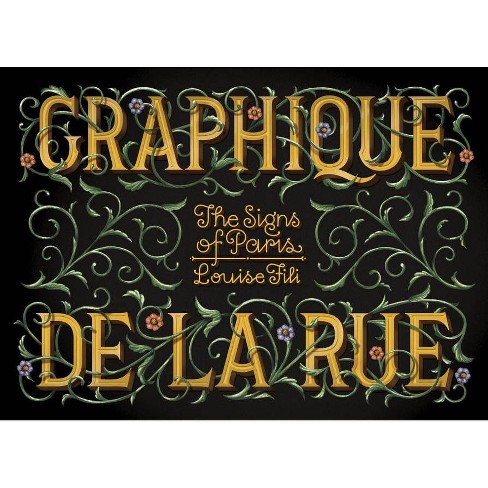 $31.99
0 out of 5 stars with 0 reviews
be the first!be the first! ratings
Shipping
Free standard shipping with RedCard
Help us improve this page

Paris is a city of pure enchantment, and everyone who loves the City of Light has a Parisian muse, from the Tour Eiffel to crï¿½me caramel. For celebrated graphic designer and incessant flï¿½neur Louise Fili, it's the city's dazzling signage. For more than four decades, Fili has strolled picturesque Parisian rues and boulevards with map and camera, cataloging the work of generations of sign craftsmen. Graphique de la Rue is Fili's photographic diary of hundreds of Paris's most inventive restaurant, shop, hotel, street, and advertising signs. Classic neon cafï¿½ signs are juxtaposed with the dramatic facades of the Moulin Rouge and the Folies Bergï¿½re. Colorful mosaics cheerfully announce hotel entrances, department stores, fishmongers, even public toilets. Hector Guimard's legendary entrances to the Paris Mï¿½tro stations brush elbows with graceful gold-leaf and dimensional Art Deco, Futurist, or Art Nouveau architectural lettering, as well as whimsical pictorial signs (giant eyeglasses announce optiques, and oversized hanging shears indicate a knife and scissors maker). A major influence on Fili's own work, many of these masterpieces of vernacular design, now destroyed, live on solely in this book, a typographic love letter to Paris sure to inspire designers and armchair travelers alike.
If the item details above aren’t accurate or complete, we want to know about it. Report incorrect product info.