Hail to the Chief - (Ellis the Elephant) by Callista Gingrich (Hardcover) 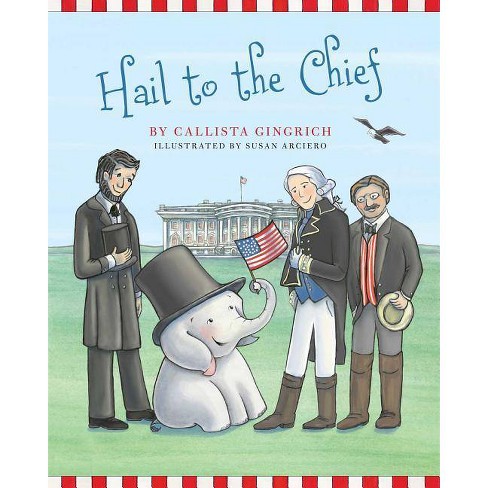 $12.89
MSRP$16.99
no reviews yet
be the first!be the first! ratings
Shipping
Free standard shipping with RedCard
Loading, please wait...
Help us improve this page

Callista Gingrich is the president of Gingrich Productions. She and her husband, Newt, host and produce documentary films. Recent films include The First American, Divine Mercy, A City Upon a Hill, America at Risk, and Nine Days that Changed the World. Mrs. Gingrich is the author of the New York Times bestselling children's series featuring Ellis the Elephant. Recent books include Christmas in America, From Sea to Shining Sea, Yankee Doodle Dandy, Land of the Pilgrims' Pride, and Sweet Land of Liberty. She is also the co-author of Rediscovering God in America and Ronald Reagan: Rendezvous with Destiny.
Mrs. Gingrich is the voice for several audio books, including A Nation Like No Other and To Save America. She is also the president of the Gingrich Foundation, a charitable non-profit corporation. Mrs. Gingrich resides in McLean, Virginia with her husband, Newt Gingrich.
Susan Arciero is the illustrator of numerous children's books, including Sweet Land of Liberty; Land of the Pilgrims' Pride; Nat, Nat the Nantucket Cat; and Cornelius Vandermouse. Growing up in Massachusetts and traveling the world as a military family, including ten years in Washington, D.C. made researching these illustrations even more captivating and inspiring. She lives in Pinehurst, North Carolina, with her husband, three children, and two Basset Hounds.
If the item details above aren’t accurate or complete, we want to know about it. Report incorrect product info.