Hail to the Chin - by Bruce Campbell & Craig Sanborn (Paperback) 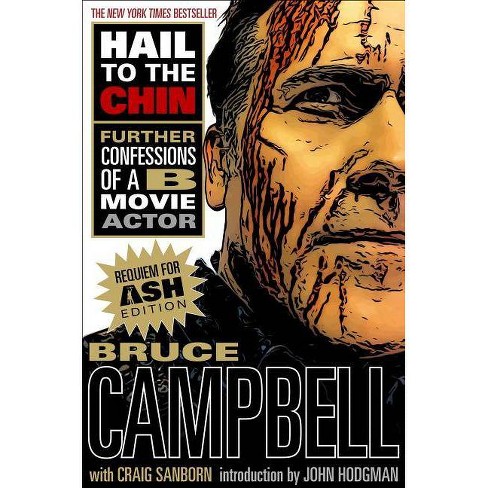 With an introduction by New York Times bestselling author and famous minor television personality John Hodgman. Hail to the Chin is the new raucous and sardonic memoir from Bruce Campbell, a follow-up to the New York Times bestselling If Chins Could Kill. It's been 15 years since his first memoir but Bruce is still living the dream as a B movie king in an A movie world. His roles have been as varied as they are numerous--from the Spider-Man movies to his self-referential My Name is Bruce to the #1 show Burn Notice and his STARZ hit series Ash vs Evil Dead. Bruce covers the professional and the personal with stories about his quickly canceled series Jack of All Trades, working on Sci-Fi Channel movies in Bulgaria and playing Santa Claus and Ronald Reagan as well as his move from Los Angeles to Oregon where he distills lavender and joins the local Elks club. And now in this updated paperback, Bruce shares brand new stories from his life since the hardcover's publication, including a requiem of Ash and details from his European book tour. Hail to the Chin will be bursting with pictures and the signature humor that Bruce brought to If Chins Could Kill and will be devoured by his legions of fans across the country.

Campbell is an amusing raconteur, sharing stories about shooting the indie film My Name Is Bruce in his backyard, working on his old friend Sam Raimi's Spiderman movies, and spending seven seasons on Burn Notice. . . . Campbell is always entertaining, and his smart-ass style makes for a groovy ride. . . . Fans will eagerly await a sequel. --Publishers Weekly

Die-hard fans will embrace it as canon... --The Washington Post Whether recounting his life in the boondocks of south Oregon or the making of the dud The Man with the Screaming Brain in Bulgaria, Campbell, backed by co-author Sanborn, and his B-movie anecdotes, are thoroughly engaging and witty. --Booklist

Campbell sheds further light on the (decidedly unglamorous) existence of a B-list actor, and fans of his work will undoubtedly be excited to read more from the enigmatic movie star.... Chock-full of amusing anecdotes about the underappreciated B-list movie industry. Hand to admirers of Campbell's previous book and fans of the talkies. --Library Journal A breezy read through a breezy life. --Kirkus Reviews

Much like his Campbell's on-screen presence, Hail to the Chin: Further Confessions of a B Movie Actor is wildly vivacious. As he explains in the book's prologue, Campbell sees his memoirs as a trilogy. If If Chins Could Kill was the hero's origin story, then Hail to the Chin represents the second act. --Broke Horror Fan

Praise for If Chins Could Kill
"The book offers insights into the world of independent filmmaking and the life of a "B" actor, but most importantly it succeeds as an evocative memoir that allows the reader to know Campbell."--School Library Journal "An insightful and rant-filled guide to being almost famous."--GQ "Exceptionally literate yet conversational, wide-ranging but never wandering, and copiously, gleefully illustrated..." --Booklist entertaining and witty...Forecast: While a boon to film cultists and to Campbell's many fans, this book also has enough insights and smarts to appeal to readers with a serious interest in popular culture.--Publishers Weekly Campbell forgoes Hollywood anecdotes for more entertaining tales of struggling to break into the biz (even after Evil Dead II, he had to work security). With a quirky assortment of rants, as well as self-deprecating chapter titles like "The Higher the Budget, the Lower the Part," he's like the dinner guest you wish would never leave.--Entertainment Weekly This book is indispensable to anyone aspiring to a career as an actor, director, producer, or just about any other aspect of movie making...A fast, enjoyable read that is sure to garner Campbell even more of a following.--Fangoria

In 1979 with Sam Raimi and Rob Tapert, BRUCE CAMPBELL filmed the Evil Dead, which he starred in and co-executive produced. Bruce has written back-to-back New York Times bestsellers, appeared in all three of Raimi's Spider-Man movies, and in 2013 he completed a seven-year run on Burn Notice, USA's #1 show on cable. In a return to his B-movie roots, he completed season three of the Ash Vs. Evil Dead TV series on Starz in 2018.
If the item details above aren’t accurate or complete, we want to know about it. Report incorrect product info.