Half a Wing, Three Engines and a Prayer - (Aviation Week Books) by Brian D O'Neill (Paperback) 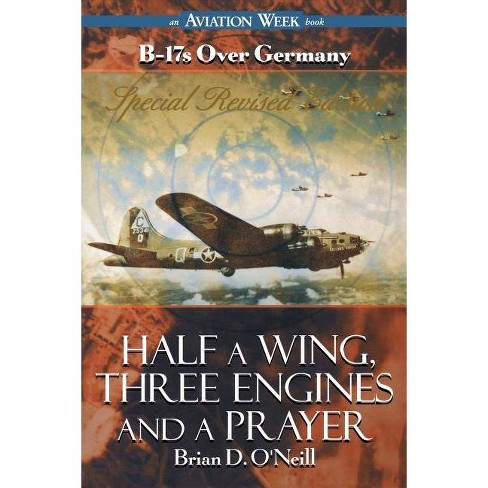 Publisher's Note: Products purchased from Third Party sellers are not guaranteed by the publisher for quality, authenticity, or access to any online entitlements included with the product.

A well-researched, highly readable account of a B-17 combat crew's experience


In 1943, when the outcome of World War II hung in the balance, B-17 crews of the Eighth Air Force flew harrowing, unescorted daylight bombing missions deep into Occupied Europe and Germany. These devastating raids have long been storied in film and fiction, but here is a firsthand, blow-by-blow account of these perilous missions as they really happened. In these pages, you'll see the events unfold as they were recorded and recalled by one crew's officers and enlisted men (pilot, copilot, navigator, radioman, and gunners), corroborated by other crews they flew with, and painstakingly correlated with the official records of the men's 303rd "Hell's Angels" Bomb Group.

The publication of Half a Wing, Three Engines, and a Prayer in 1989 prompted a flood of fresh recollections, correspondence, and personal records from other veterans of the 303rd. This Special Revised Edition incorporates that wealth of new material into a vivid, thorough recreation -- complete with actual combat photographs -- of one of the most dramatic chapters in military aviation history.

"A well-researched, highly readable account of a B-17 combat crew's experience...excellent." -- Roger A. Freeman, author of The Mighty Eighth

"The best collection of stories about a B-17 Bomb Group that has ever been published." -- Harry D. Gobrecht, President, 303rd Bomb Group Association and author of Might in Flight: Daily Diary of the Eighth Air Force's 'Hell's Angels' Bomb Group