Half Upon a Time - by James Riley (Paperback) 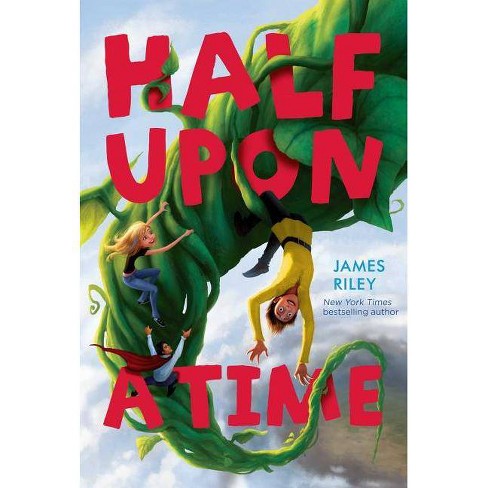 In the village of Giant's Hand Jack's grandfather has been pushing him to find a princess and get married, so when a young lady falls out of the sky wearing a shirt that says "Punk Princess," and she tells Jack that her grandmother, who looks suspiciously like the long-missing Snow White, has been kidnapped, Jack decides to help her.

In this hilarious fractured fairy tale series from New York Times bestselling author James Riley, Jack, and "punk princess" May must navigate twists and turns unlike anything you've seen before! Jack lives in a fantasy world. Really. He's the son of the infamous Jack who stole the magic beans from the giant, and he's working hard to restore his family's reputation. He finds the perfect opportunity when a "princess" lands in front of him, apparently from the land of Punk, as her Punk Princess sweatshirt implies. May is from our world, and she's utterly confused to find herself in the midst of the fairy tale characters she has read about. But Jack and May have more in common than they realize--and together, they embark on a hilarious and wild adventre in this highly accessible, modern middle grade fantasy novel.

Gr 5-9-In his twisted fairy-tale world, hapless young Jack fails his princess-rescuing test, but fate gives him another chance when a circle of blue fire deposits May, wearing a T-shirt that reads "Punk Princess," into his cottage. Jack recognizes her as a true princess and they set off on a quest to find her grandmother, Snow White. Joined by super-smooth Prince Phillip, and staying just ahead of the giant green Huntsman, they journey to the Black Forest, ride the wicked wolf's back, release a genie when they break Red Hood's magic mirror, and spend time in the dungeon of a fairy queen before finding Snow White and seven dwarfs in the Palace of the Snow Queen. Jack is perennially clumsy, and May has a quick, sharp tongue until she trades her sarcasm to save Jack's life. Snappy dialogue, fast-paced action, unexpected twists, and the inevitable conflicts of a threesome made up of two teenage boys and a pretty girl make this an enjoyable read. A whirlwind ending upsets everything, setting the stage for a sequel."-Kathleen Isaacs, ""Children's Literature Specialist, Pasadena, MD"

The first character we meet in this tale is Jack. But he is not the fairy tale Jack of Beanstalk fame. No, that Jack was this Jack's father; and this Jack hasn't seen him since that famous encounter with the giant. Living with his grandfather in the shadow of his father's reputation as a thief, Jack is a different sort of hero. His education is devoted to learning how to save a princess, since that is the only way to escape his life as a peasant. Unfortunately, Jack doesn't seem to be very good at it. He alone, of all the village boys, has failed his princess-saving test. Again. Still, that hardly seems to matter when a princess named May unexpectedly drops into his life. Her grandmother is missing, and she needs Jack's help to save the old woman. Before you know it, Jack is facing witches and wolves, taking on giants and dragons with the best of them. Along the way, he and May pick up a dainty companion (a fairy), a noble companion (Prince Phillip) and a scary companion (the Wolf King). A host of familiar fairy tale characters appear, including--but certainly not limited to--Snow White, Merriweather, Malevolent, Red Riding Hood, the Wicked Queen, the Huntsman, the Seven Dwarves, and Rapunzel. James Riley's novel is more a re-imagined and greatly embroidered fairy tale than it is a fractured one. "Quick-paced" is an understatement, as our heroes move swiftly from one danger to the next, with hardly a breath in between. The only disappointment is that all of the bad guys get away--but there's pleasure in that, too, as it means we'll get to see May, Jack, and Phillip track them down to set things right in a much-anticipated sequel. Highly recommended. - www.childrenslit.com

"Half Upon A Time "has it all--voice, charming fairy tale characters with a twist, hilarity, and an adventure-filled plot.

James Riley lives in Virginia. He is the author of Half Upon a Time, Twice Upon a Time, and Once Upon the End as well as the Story Thieves series. Erwin Madrid is a children's book illustrator based in San Francisco, where he earned his BFA at the Academy of Art College. He has worked for PDI/Dreamworks Animation on films like Shrek 2 and the Madagascar sequels. He has also done concept art for the gaming industry for titles like Uncharted: Drake's Fortune. In his spare time, Erwin travels and goes plein air painting.
If the item details above aren’t accurate or complete, we want to know about it. Report incorrect product info.