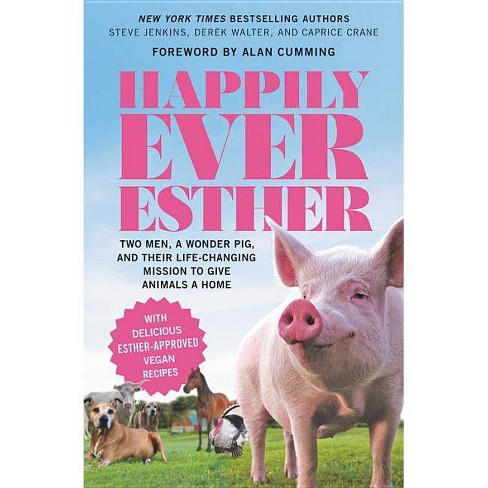 From the New York Times bestselling authors and loving owners of Esther the Wonder Pig, comes a memoir about their new life on the Happily Ever Esther Farm Sanctuary, which is anything but boring. Steve Jenkins and Derek Walter, had their lives turned upside down when they adopted their pig-daughter Esther--the so-called micro pig who turned out to be a full-sized commercial pig growing to a whopping 600 pounds--as they describe in their bestselling memoir Esther the Wonder Pig. The book ends with them moving to a new farm, and starting a new wonderful life where they will live on the Happily Ever Esther Farm Sanctuary to care for other animals and just live happily ever after... Or so they thought. People often think about giving it all up and just moving to a farm. In theory it sure does sound great. But as Derek and Steve quickly realized, the realities of being a farmer--especially when you have never lived on a farm let alone outside of the city--can be frantic, crazy, and even insane. Not only are they adjusting to farm life and dutifully taking care of their pig-daughter Esther (who by the way lives in the master bedroom of their house), but before they knew it their sanctuary grew to as many as 42 animals, including: pigs, sheep, goats, rabbits, chickens, cows, roosters, a peacock, a duck, a horse, a donkey, and a barn cat named Willma Ferrell. Written with joy and humor, and filled with delicious Esther-approved recipes dispersed throughout the book, this charming memoir captures an emotional journey of one little family advocating for animals everywhere.

"Alternately heartwarming and hilarious, earnest and absurd...a testament to how the idealism, perseverance and activism of ordinary people can actually change people's minds and change the world for the better."--Winnipeg Free Press

"Using his trademark self-deprecating humor, Jenkins...chronicles the zany misadventures...Jenkins is refreshingly candid...this is essential reading for [Esther's] many fans."--Library Journal

In just two short years, Steve Jenkins and Derek Walter have cemented a place for themselves among the worlds most well-known and successful animal activists, accumulating hundreds of thousands of followers from all over the world. In 2014, Steve and Derek founded the Happily Ever Esther Farm Sanctuary in Campbellville, Ontario, where they continue to rescue and rehabilitate abandoned and abused farmed animals. Caprice Crane is an award-winning, internationally bestselling, five-time novelist, screenwriter, and television writer, and has the distinction of being one of Huffington Post's "50 Funny People You Should Be Following on Twitter." Her debut novel Stupid and Contagious (published in fourteen countries), and her international bestselling Forget About It won the RT Reviews Choice Award in 2006 and 2007 consecutively. She has since published three more novels to critical acclaim.
If the item details above aren’t accurate or complete, we want to know about it. Report incorrect product info.