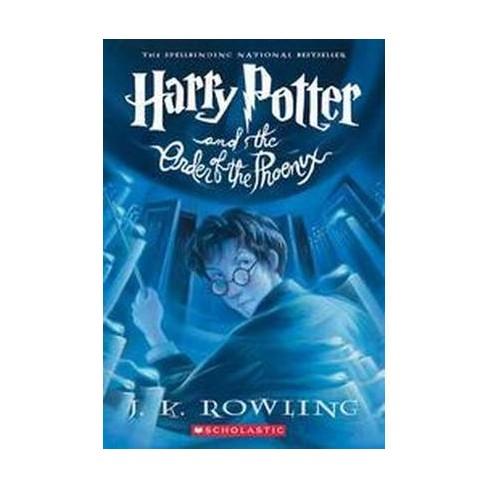 In his fifth year at Hogwart's, 15-year-old Harry faces challenges at every turn, from the dark threat of He-Who-Must-Not-Be-Named to the rise of Ron Weasley as the keeper of the Gryffindor Quidditch Team. Illustrations.

The most eagerly anticipated book in history becomes the biggest paperback release of 2004!The book that took the world by storm....In his fifth year at Hogwart's, Harry faces challenges at every turn, from the dark threat of He-Who-Must-Not-Be- Named and the unreliability of the government of the magical world to the rise of Ron Weasley as the keeper of the Gryffindor Quidditch Team. Along the way he learns about the strength of his friends, the fierceness of his enemies, and the meaning of sacrifice.

Kirkus Reviews July 15th, 2003
The Potternaut rolls on, picking up more size than speed but propelling 15-year-old Harry through more hard tests of character and magical ability. Rowling again displays her ability to create both likable and genuinely scary characters--most notable among the latter being a pair of Dementors who accost Harry in a dark alley in the opening chapter. Even more horrible, Ministry of Magic functionary Dolores Umbridge descends upon Hogwarts with a tinkly laugh, a taste in office decor that runs to kitten paintings, and the authority, soon exercised, to torture students, kick Harry off the Quidditch team, fire teachers, and even to challenge Dumbledore himself. Afflicted with sudden fits of adolescent rage, Harry also has worries, from upcoming exams and recurrent eerie dreams to the steadfast refusal of the Magical World's bureaucracy to believe that Voldemort has returned. Steadfast allies remain, including Hermione, whose role here is largely limited to Chief Explainer, and a ragtag secret order of adults formed to protect him from dangers, which they characteristically keep to themselves until he finds out about them the hard way. Constructed, like GOBLET OF FIRE, of multiple, weakly connected plot lines and rousing, often hilarious set pieces, all set against a richly imagined backdrop, this involves its characters once again in plenty of adventures while moving them a step closer to maturity. And it's still impossible to predict how it's all going to turn out. (Fiction. 12-15) Bulletin of the Center for Children's Books September 2003
Harry Potter's latest adventure reveals an admirable hero somewhat the worse for wear: his grief at the death of Cedric, his fear of (and connection to) the evil Lord Voldemort, and his emotional distance from Professor Dumbledore combine to make Harry a bit short-tempered, a bit short-sighted, and a bit more recognizably human. Rowling eases readers back into Harry's world-and-Harry's precarious existence-with nary a ripple: the suburban peace of the Dursleys' manicured lives is shattered by the intrusion of dementors, sent by a rogue in the Ministry of Magic and seeking to do Harry serious injury. A wizard rescue party retrieves Harry from the world of Muggles and sets him down amidst the Order of the Phoenix, a secret society that plots Voldemort's final downfall. With an escalating love life, academic complications at school, and a Ministry of Magic determined to ignore the obvious, Harry is in an adolescent uproar. Revelations about Sirius Black, Professor Snape, and Harry's late father cause the boy to question all he holds true, and his confusion clouds his judgment. A roaring set of practical jokes by Fred and George Weasley against a politically appointed, obnoxious new professor at Hogwarts lightens the tone just in time for the Order's tragic confrontation with Voldemort and his malevolent minions. Rowling cheerfully turns her own conventions on th@ir cars, and the result is a surprising and enjoyable ride. While Harry's much-touted love interest fizzles before it fires, familiar characters achieve a bit more depth. Ginny Weasley starts to come into her own, Hermione employs a dryly wicked wit, and Dumbledore reveals, if not feet, at least a little toe of clay. It's no longer quite clear that all will work out in the end; the lines are being drawn, but, as exemplified by Percy Weasley, not everyone is on the right side. Rowling has managed to make Harry and his fate a bit less predictable, which, in the fifth of a seven-volume series, is a very good thing. JMD Horn Book Magazine
(September 1, 2003; 0-439-35806-X) (Intermediate, Middle School) This review is much like the proverbial tree falling in an uninhabited forest: unlikely to make a sound. But for the record, HP5 is the best in the series since Azkaban, and far superior to the turgid HP4. With Rowling once again f
If the item details above aren’t accurate or complete, we want to know about it. Report incorrect product info.