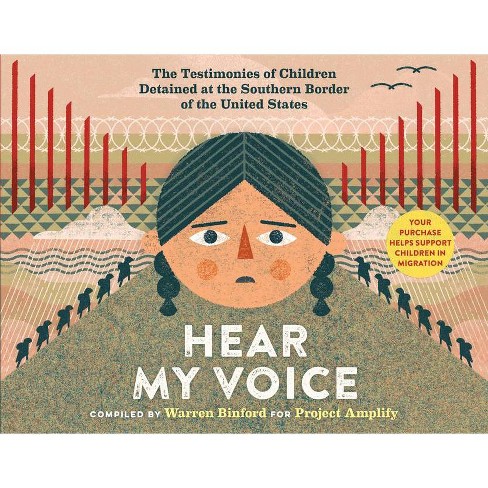 "A moving picture book for older children and families that introduces a difficult topic, amplifying the voices and experiences of immigrant children detained at the border between Mexico and the US. The children's actual words (from publicly available court documents) are assembled to tell one heartbreaking story, in both English and Spanish (back to back). Each spread is illustrated in striking full-color by a different Latinx artist. A portion of sales will be donated to human rights organizations that work with children on the border"--

The moving stories of children in migration--in their own words. "In Spanish and in English, a devastating first-person account of children's experiences in detention at the southern U.S. border.... A powerful, critical document only made more heartbreaking in picture-book form." --Kirkus Reviews starred review Every day, children in migration are detained at the US-Mexico border. They are scared, alone, and their lives are in limbo. Hear My Voice/Escucha mi voz shares the stories of 61 these children, from Honduras, Guatemala, El Salvador, Ecuador, and Mexico, ranging in age from five to seventeen--in their own words from actual sworn testimonies. Befitting the spirit of the project, the book is in English on one side; then flip it over, and there's a complete Spanish version. Illustrated by 17 Latinx artists, including Caldecott Medalist and multiple Pura Belpré Illustrator Award-winning Yuyi Morales and Pura Belpré Illustrator Award-winning Raὺl the Third. Includes information, questions, and action points. Buying this book benefits Project Amplify, an organization that supports children in migration.

"In Spanish and in English, a devastating first-person account of children's experiences in detention at the southern U.S. border.... A powerful, critical document only made more heartbreaking in picture-book form."
--Kirkus Reviews starred review "The text unfolds simply but meaningfully--with the children's own words, intertwined not as a single, broad narrative but in a harmonious array of voices, each with a unique story to tell... this is a heartrending but vital work."
--Publishers Weekly starred review

Project Amplify is a national campaign launched to establish legal protections for children in government care so that the brutality discovered on the border never happens again. Project Amplify's lead organizer is Warren Binford, an internationally recognized children's rights scholar and advocate who holds a tenured position as Professor of Law and serves as the Director of the Clinical Law Program at Willamette University. She founded Willamette's Child and Family Advocacy Clinic, which has provided pro bono legal support to children and families in crisis, as well as guidance on legislation and public policy. She has published nearly 60 law review articles, book chapters, essays, NGO publications, and editorials and has given approximately 150 presentations, primarily on topics related to children's issues, throughout the country and around the world. Binford holds a J.D. from Harvard Law School and a B.A., summa cum laude with distinction, and an Ed.M. from Boston University. She lives in Oregon.

Michael Garcia Bochenek (foreword) is senior counsel to the Children's Rights Division of Human Rights Watch, focusing on juvenile justice and refugee and migrant children. He has researched and reported on criminal and juvenile justice systems and prison conditions, the protection of refugees and internally displaced persons, the exploitation of migrant workers and other labor rights issues, the rights of lesbian, gay, bisexual and transgender persons, and rights violations in armed conflict, including the use of children as soldiers. From 2006 to 2015, he was director of policy and then director of law and policy for Amnesty International's secretariat in London, where he oversaw strategic litigation, among other responsibilities. He holds a bachelor's degree from Michigan State University and a law degree from Columbia University. In addition to English, he speaks Spanish and Portuguese. Michael lives in New York.
If the item details above aren’t accurate or complete, we want to know about it. Report incorrect product info.