Heartbreakers and Fakers - by Cameron Lund 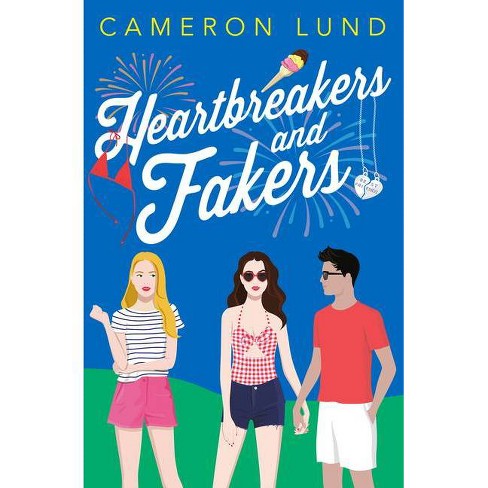 From the author of The Best Laid Plans comes another fresh voiced, hilarious rom-com perfect for fans of You Have a Match and The Rest of the Story. Penny Harris just ruined her life. As one of the most popular girls in school, she's used to being invited to every party, is dating the Jordan Parker, and can't wait to rule senior year with her best friend, Olivia. But when Penny wakes up on Jordan's lawn the morning after his first-day-of-summer bash, she knows something went horribly wrong the night before. She kissed Kai Tanaka. Kai, her longtime nemesis. Kai, Olivia's boyfriend. Penny can't figure out what could have inspired her to do it--she loves Jordan and she would never hurt Olivia--but one thing's for sure: freshly dumped, and out a best friend, the idyllic summer she pictured is over. And despite the fact that Jordan seems to be seeking comfort (and a whole lot more) in Olivia, all Penny can think about is winning him back. Kai wants to save his relationship too, so they come up with a plan: convince their friends that they really do have feelings for each other. After all, everyone forgives a good love story, and maybe seeing Penny and Kai together will make Jordan and Olivia change their minds. But as summer heats up, so does Penny and Kai's "relationship," and Penny starts to question whether she's truly faking it with Kai, if he's really as terrible as she always thought he was, and if the life she's fighting so hard to get back is the one she really wants.

"In this fresh rom-com...Penny's character growth is clear and sympathetic, as she goes from self-obsessed popular girl to a young woman who explores her emotions and desires in the age of social-media romance, cyberbullying, and gossip chains." --Booklist "A lighthearted and perceptive fauxmance." --Kirkus Reviews "A happily-ever-after, incorporating angst and twists along the way." --SLJ "Come for the fake dating, stay for the fraught feelings and an ending that will make your heart soar." --Jennifer Iacopelli, Author of Break The Fall "Messy, honest, and fun, Lund's latest is a read-in-one-sitting tropey romp that I never wanted to end." --Jennifer Dugan, Author of Hot Dog Girl "An honest, funny, and fresh take on fake dating! Heartbreakers and Fakers has sparkling banter, swoony romance, and complicated teenagers that feel so real." --Elise Bryant, Author of Happily Ever Afters

Cameron Lund is a young adult author, singer/songwriter, and pizza enthusiast. Originally from the middle of the New Hampshire woods, she moved to the beach to study film at the University of California, Santa Barbara, and has stayed out west ever since. Her love of travel has taken her to more than twenty-five countries--there's nothing she loves more than writing while on an adventure somewhere, preferably with a view of a waterfall. Cameron is also the author of The Best Laid Plans. Find her on Twitter and Instagram @camloond.
If the item details above aren’t accurate or complete, we want to know about it.

Symptoms of a Heartbreak - by Sona Charaipotra (Paperback)

The Heartbreak Bakery - by A R Capetta (Hardcover)

Who Are You? - (Lake Superior Mystery) by R T Lund (Paperback)

The Boy with a Bird in His Chest - by Emme Lund

this story has every ya trope ever, I loved it

3 out of 5 stars
GracieReadsYA - 2 years ago
3.5 stars for the lake vibes, then and now chapters timeline, and an impressive use of like eight million ya tropes some thoughts while reading: - predictions: penny is going to fall for kai. olivia and jordan have been hooking up forever. penny and sarah k are going to become friends, jordan is actually an awful person - these girls are the worst! they're so shallow and their friendships are so tenuous - my high school experience was beyond different from these peoples. do they do literally anything besides drink and make fun of people? - were kai and olivia even actually together? they never interact in the "now" chapters - I feel so bad for olivia. people usually act that mean because they're really hurting inside man, these characters are so TOXIC. I was so frustrated and stressed reading this because everyone just made me so mad (except kai and seb, they're great lol). even so, I was surprised by how much I liked this book! it was a quick, engaging read jam packed with ya tropes (kissing your best friend's boyfriend (who is also your boyfriend's best friend because let's make this more complicated lol), fake dating, haters to lovers, becoming friends again with the weird girl, reinventing yourself, working a summer job at an ice cream place in your lake town, etc). penny goes through so much growth, and the end was pretty satisfying and worth the read!
Did you find this review helpful?