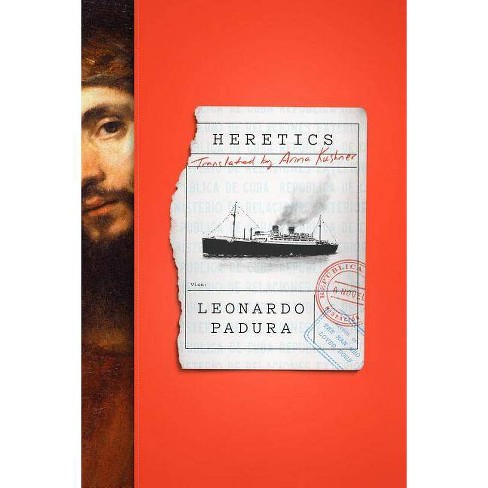 "In 1939, the Saint Louis sails from Hamburg into Havana's port with hundreds of Jewish refugees seeking asylum from the Nazi regime. From the docks, nine-year-old Daniel Kaminsky watches as the passengers, including his mother, father, and sister, become embroiled in a fiasco of Cuban corruption. But the Kaminskys have a treasure that they hope will save them: a small Rembrandt portrait of Christ. Yet six days later the vessel is forced to leave the harbor with the family, bound for the horrors of Europe. The Kaminskys, along with their priceless heirloom, disappear. Nearly seven decades later, the Rembrandt reappears in an auction house in London, prompting Daniel's son to travel to Cuba to track down the story of his family's lost masterpiece"--

A sweeping novel of art theft, anti-Semitism, contemporary Cuba, and crime from a renowned Cuban author, Heretics is Leonardo Padura's greatest detective work yet. In 1939, the Saint Louis sails from Hamburg into Havana's port with hundreds of Jewish refugees seeking asylum from the Nazi regime. From the docks, nine-year-old Daniel Kaminsky watches as the passengers, including his mother, father, and sister, become embroiled in a fiasco of Cuban corruption. But the Kaminskys have a treasure that they hope will save them: a small Rembrandt portrait of Christ. Yet six days later the vessel is forced to leave the harbor with the family, bound for the horrors of Europe. The Kaminskys, along with their priceless heirloom, disappear. Nearly seven decades later, the Rembrandt reappears in an auction house in London, prompting Daniel's son to travel to Cuba to track down the story of his family's lost masterpiece. He hires the down-on-his-luck private detective Mario Conde, and together they navigate a web of deception and violence in the morally complex city of Havana. In Heretics, Leonardo Padura takes us from the tenements and beaches of Cuba to Rembrandt's gloomy studio in seventeenth-century Amsterdam, telling the story of people forced to choose between the tenets of their faith and the realities of the world, between their personal desires and the demands of their times. A grand detective story and a moving historical drama, Padura's novel is as compelling, mysterious, and enduring as the painting at its center.

Gorgeous, sweeping . . . Heretics is part history, part detective story, but its overarching theme is the tension between the limitless yearnings of the human spirit and the limitations of geography and politics . . . Padura seems to have set his sights on transcending his island nation's political system, rather than defying it. --Charles Lane, The Washington Post

"Like Viet Thanh Nguyen's novel The Sympathizer . . . Padura's Heretics spans and defies literary categories. All of which would only be of ho-hum technical interest if Heretics weren't also an arresting novel about fanaticism, anti-Semitism and the long fall-out of a decades-old moment of political cowardice . . . Padura's ingenious novel is something of a heretic itself: by turns playful, dark, and moving, it traces the great psychic costs--and rewards--that come from nestling so deeply into dogma that nothing is permitted to trigger doubt."
--Maureen Corrigan, Fresh Air "A grungy, beautiful gutter epic . . . Rum-soaked and bloody. Dangerous and funny. Chandler in the tropics, if Chandler had a sense of humor and a PhD in art history and Diaspora studies."
--Jason Sheehan, NPR Books The pages of Cuban author Leonardo Padura's ample feast of a historical novel (translated from the Spanish, con gusto, by Anna Kushner) are populated by 'Heretics' of many sorts--religious, artistic, political and social . . . Mr. Padura displays a painter's eye worthy of his expansive canvas, which includes Dutch burghers in 1647, Jewish refugees escaping Hitler, Cuban baseball fans in the 1950s and disaffected Havana youth of the mid-2000s. This rich prose-panorama proves to be as much a spiritual meditation and a paean to individual freedom as it is a murder mystery and a treasure hunt. --Tom Nolan, The Wall Street Journal "The Cuban Leonardo Padura's reputation is ironclad, and if you need reminding why, pick up Heretics . . . It's as much an astringent picture of Padura's own society as a crime fiction outing."
--Barry Forshaw, The Guardian, The Best Recent Thrillers "A multigenerational epic of baseball, religion, and a mysterious Rembrandt painting . . . Padura's novel does not just place dogma and religious law against human desire . . . Heretics asks us what we remember, and why; do we know anything about our grandparents' traumas, and, if so, why is that generational memory easier to lose in time than a painting?
--Josephine Livingstone, The New Republic "[A] fantastic novel . . . Now in a stunning translation by the preeminent translator of Cuban literature Anna Kushner, Hereticsdepicts Havana's unorthodox progression into the present with an equally orthodox telling of it . . . As Cuba slowly acclimates to the world and Havana welcomes greater numbers of visitors each year, Heretics may serve as its best novelized introduction."
--Michael Barron, The Culture Trip "Remarkable . . . [Padura] moves with agility and ease from the formal discussion of heresy and the history of persecution to the drink-enabled chatter of contemporary friends. There's a through-line of speculative investigation--whether as to the existence of God, the coming of a false Messiah, the provenance of the Rembrandt or the identity of the art thief and his murderer."
--Nicholas Delbanco, Moment magazine Padura deftly handles complex issues of Jewish identity in Cuba, as well as Cuban identity on the island before and after Batista and in Miami; ultimately, he encompasses the whole richness of modern Cuban and Jewish history. This is a major novel and a testament to Padura's stature as a writer. --Mark Levine, Booklist (starred review) The intensive, richly detailed narrative is at once a portrait of Cuban upbringing, a meditation on anti-Semitism, and an intriguing account of the painting. . . Highly recommended. --Library Journal (starred review) A beautifully teeming novel of revelation and family history, alive with the cadences of Cuba and the sorrows and hopes of the WWII Jewish diaspora. This book is also a lavish detective story, unraveling across continents and cultures and decades as it probes the meaning of a single, beguiling masterpiece--a small Rembrandt portrait of Christ that refuses to be silenced in the folds of art history.
--Dominic Smith, author of The Last Painting of Sara de Vos The perfect blend of historical, social, and espionage fiction. An adventure that without a respite. The best novel of the eight that Padura has written with Conde as protagonist . . . Enjoy it. --Juan Carlos Galindo, El País Cuban mysterian Padura returns with another installment in his Mario Conde detective series, this one following a Rembrandt portrait over centuries and continents . . . Padura capably works here in Perez-Reverte territory, where art and ideas meet mayhem. Smart and satisfying. --Kirkus Reviews

Leonardo Padura was born in Havana, Cuba, in 1955. A novelist, journalist, and critic, he is the author of several novels, including The Man Who Loved Dogs (FSG, 2014); two volumes of short stories; and several nonfiction collections. His novels featuring the detective Mario Conde have been translated into many languages and have won literary prizes around the world. He lives in Cuba.

Anna Kushner was born in Philadelphia and first traveled to Cuba in 1999. She has translated the novels of Guillermo Rosales, Norberto Fuentes, Gonçalo M. Tavares, and Leonardo Padura.
If the item details above aren’t accurate or complete, we want to know about it. Report incorrect product info.