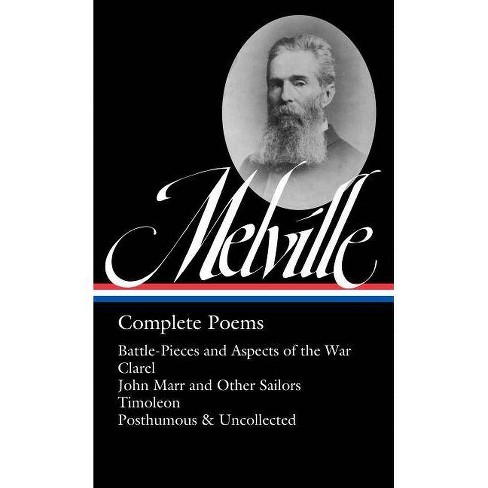 $22.49
MSRP$45.00
no reviews yet
be the first!be the first! ratings
Shipping
Free standard shipping with RedCard
Loading, please wait...
Help us improve this page

An unprecedented single-volume edition of one of America's greatest poets, released to celebrate his bicentennial Herman Melville ranks with Walt Whitman and Emily Dickinson as one of the three great American poets of the nineteenth century. Whether meditating on the bloody battlefields of the Civil War, the mysteries of faith and doubt in the Holy Land, or the strange relationship between the Maldive Shark and the pilot fish that glide before "his Gorgonian head," Melville's verse combines precise physical detail and rich metaphysical speculation in an unorthodox style and with a compressed power uniquely his own. The fruit of decades of textual scholarship, this fourth and final volume of the Library of America Melville edition gathers for the first time in one volume all of Melville's poems: the four books of poetry published in his lifetime, his uncollected poems, and the poems from two projected volumes of poetry and prose left unfinished at his death. Battle-Pieces and Aspects of the War is both a deeply philosophical work of mourning for the Civil War dead and a fascinating record of campaigns and battles and the war's immediate aftermath. With a cast of characters to rival Moby-Dick, the epic poem Clarel, about a young American divinity student's pilgrimage to the Holy Land, plumbs the profound existential and religious questions that haunted Melville throughout his life. In two late privately issued books, the retrospective John Marr and Other Sailors and Timoleon Etc., the aging poet returns to the nautical scenes and reading of his youth. Many of the poems in the two manuscripts left unfinished at Melville's death, Weeds and Wildings and Parthenope, have not been previously available in a reliable trade edition.
If the item details above aren’t accurate or complete, we want to know about it. Report incorrect product info.