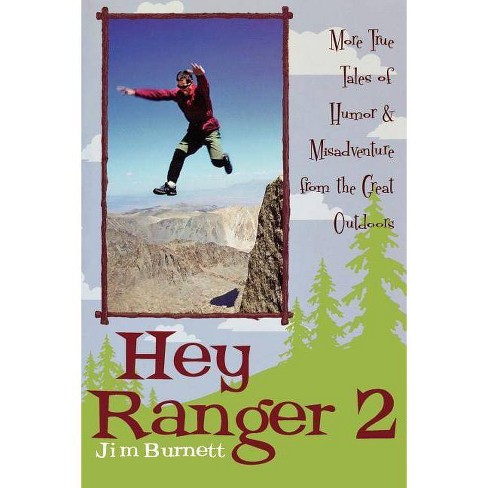 In this sequel to the wildly successful Hey Ranger: True Tales of Humor and Misadventure from America's National Parks, former ranger Jim Burnett casts his net globally in search of the most outrageous and humorous stories of man in his eternal quest to experience the natural world.

In this sequel to the wildly successful Hey Ranger: True Tales of Humor and Misadventure from America's National Parks, former ranger Jim Burnett casts his net globally in search of the most outrageous and humorous stories of man in his eternal quest to experience the natural world. Burnett tells of campers being belted by mysterious objects falling from the sky, like potatoes and ice cream; wildlife photos that went awry, including a ground squirrel that outwits a photographer; dumb crooks in parks, such as the drunk driver who mistakenly knocked on a judge's door to report an accident; and drivers who went over the hill and into the woods instead of to Grandma's house. Burnett also assembles contenders for the strangest questions ever asked of a park ranger, lessons on how not to pick a campsite, life lessons you can learn from a canoe trip, as well as some classic bear stories. As always, Burnett's stories are meant to inform as well as entertain, and serve as cautionary tales on how not to become "a victim of your vacation." Told in Burnett's classic, conversational style, Hey Ranger 2 will not disappoint.

All National Park rangers have a treasure trove of stories about the silly and the serious side of visitor adventures. Jim Burnett not only shares his own tales, but manages to pry other amusing spins from his cohorts in this second book of the Hey Ranger! series. The accounts are not only entertaining, but informative as Burnett provides answers to questions all visitors have longed to ask, but were too embarrassed to discuss.--Brett Prettyman "The Salt Lake Tribune"

It has been my experience that the truth is much stranger than fiction-and thus simply more interesting. Jim Burnett's true tales of adventure as a 30-year park ranger are most often funny, sometimes poignant-and always entertaining. It's the perfect bedside book for lovers of the out-of-doors.--Thom Gabrukiewicz "Outdoors Editor, Record Searchlight"

This book is a sequel to author Jim Burnett's first book of stories culled from incidents in national parks, at which he worked as a ranger for 30 years. Regularly interacting with the public, the encounters gave Burnett plenty of fodder to share in this second book, which he broadens to include global experiences. Combining his outdoor knowledge and true stories (he changes names occasionally to protect, as he writes, the guilty and the innocent), Burnett choose some interesting, hilarious and perplexing incidents. At times you'll wonder what in the h-e-double-toothpicks the person was thinking. But one man's foolishness is another man's amusement. This book is a fun trip away from the usual writings about outdoor experiences.--Amy Maestas "Inside/Outside Magazine"

Jim Burnett has struck gold again with Hey Ranger 2 thanks to the uncanny ability of some national park visitors to show how little they actually know about the out-of-doors. Along with providing a nicely delivered dose of humor, Jim's collection of anecdotes should serve as a reminder for the rest of us to prepare properly for our forays into nature.--Kurt Repanshek, Author of Frommer's National Parks With Kids

A veteran of thirty years as a National Park Service ranger, Jim Burnett worked at eight parks across the US, including Grand Canyon, Glacier, Lake Mead, and Buffalo River before retiring as Chief Ranger at Colonial National Historic Park. He lives near Athens, Texas.
If the item details above aren’t accurate or complete, we want to know about it. Report incorrect product info.