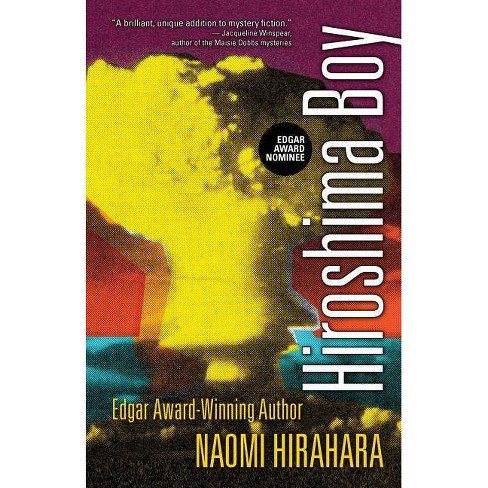 Nominated for the Edgar Award
A CrimeReads Best Book of 2018
A KCET Notable Book of 2018 "I've always admired Naomi Hirahara's Mas Arai. A brilliant, unique addition to mystery fiction from the very beginning, his character has straddled time, place, and culture, with roots in one of the most terrible acts of violence war has ever inflicted upon humanity. And Mas has prevailed while growing older in a country that does not always value the wisdom of its elders, or those who work with their hands. This may be the last entry in the series (really?), but I am sure readers will come to love Mas for years to come--he is one of a kind. Hiroshima Boy is a wonderful finale to a fine mystery series. Kudos to Naomi Hirahara."
-- Jacqueline Winspear, author of the New York Times-bestselling Maisie Dobbs mysteries "With Hiroshima Boy, Naomi Hirahara offers readers another fine, artfully understated story about a man who believes himself to be average, yet is anything but. Carrying the ashes of his deceased best friend, Mas Arai returns to Hiroshima, where he spent his childhood and was witness to the bomb that devastated the city and its populace. When Mas stumbles onto the body of a murdered boy, what began as a simple mission to keep a recent promise becomes a complex journey in understanding the past. Like a Zen poet, Hirahara creates a quiet surface with a powerful storm beneath. The novel purports to be the last in this Edgar Award-winning series. We can only hope that Naomi Hirahara has a change of heart."
-- William Kent Krueger, New York Times-bestselling author of Ordinary Grace and the Cork O'Connor mysteries "Hirahara is an Edgar-winning author, and her seventh and, we're told, final Mas Arai novel is another winner, with Mas again showing flashes of Columbo, with, perhaps, an even finer nose for nuance. A memorable conclusion to a too-little-known series."
--Booklist "Hirahara completes her Edgar Award-winning series with a quiet and melancholy mystery that explores the tragic legacy of the Hiroshima and Nagasaki bombings.
--Library Journal "The plot is tangled enough to keep you guessing throughout but smooth enough to hurl you through the book. Hirahara has the unique talent of writing lyrical sentences and characters with rich histories, yet never slowing the book down. Mas rarely grants himself access to his emotions, but Hirahara shows Mas's inner turmoil through his struggles, his determination and his awkward interactions with strangers he seems to really care about.... It's a fitting end to a beautiful series of novels.... It's also a fitting novel for our current political context."
--Arizona Daily Sun "The final book in Naomi Hirahara's compelling series featuring Mas Arai, a retired Japanese-American gardener living in Los Angeles, begins with this startling sentence: 'Mas Arai was worried that the customs officer at Kansai Airport would find his best friend, Haruo Mukai, inside his suitcase.'"
--Wall Street Journal "Hirahara is truly prolific... in the upper echelon with the best of the best in the pantheon of L.A. letters."
--L.A. Review of Books
If the item details above aren’t accurate or complete, we want to know about it. Report incorrect product info.