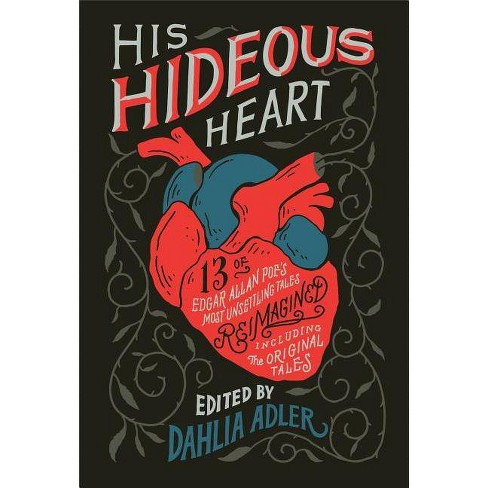 This collection of 13 retellings of short works by Edgar Allan Poe also includes the original tales or poems as written by Poe.

Thirteen of YA's most celebrated names reimagine Edgar Allan Poe's most surprising, unsettling, and popular tales for a new generation.

Edgar Allan Poe may be a hundred and fifty years beyond this world, but the themes of his beloved works have much in common with modern young adult fiction. Whether the stories are familiar to readers or discovered for the first time, readers will revel in both Edgar Allan Poe's classic tales, and in the 13 unique and unforgettable ways that they've been brought to life. Contributors include Dahlia Adler (reimagining "Ligeia"), Kendare Blake ("Metzengerstein"), Rin Chupeco ("The Murders in the Rue Morgue"), Lamar Giles ("The Oval Portrait"), Tessa Gratton ("Annabel Lee"), Tiffany D. Jackson ("The Cask of Amontillado"), Stephanie Kuehn ("The Tell-Tale Heart"), Emily Lloyd-Jones ("The Purloined Letter"), amanda lovelace ("The Raven"), Hillary Monahan ("The Masque of the Red Death"), Marieke Nijkamp ("Hop-Frog"), Caleb Roehrig ("The Pit and the Pendulum"), and Fran Wilde ("The Fall of the House of Usher").

"A superb collection of young adult short stories inspired by Edgar Allan Poe's work...The volume is divided between the new stories and Poe's originals, which makes for a delightful reading experience. Adler's anthology brims over with fierce delight and uncanny invention; the stories here vary in their effect nearly as much as Poe's do...And if you haven't read Poe before, His Hideous Heart works equally well as an introduction, a tribute and a loving critique. Welcome." --The New York Times Book Review

"Presenting 13 reinterpretations of Poe's works alongside the originals, this enticing anthology offers an accessible, multifaceted reading experience for fans old and new...A refreshing assortment of diverse voices and contemporary themes ensures there's something for everyone in this delightful compilation." --Publishers Weekly, starred review "A genre-bending collection of 13 twists on Edgar Allan Poe's works does Poe proud with this creepy and atmospheric set of stories inspired by a handful of his most well-known works...Strong feminist themes appear throughout, and genres run the gamut from futuristic to gothic to lots in between. Diversity in race, gender identity, and sexuality is well-represented. Poe's ghost happily haunts this fresh, delightfully dark collection." --Kirkus Reviews, starred review "While we love Edgar Allan Poe--the original sadboi and Halloween's unofficial literary mascot--we have to admit that his 150-year-old stories could use a 2019-worthy glow-up. The YA story collection His Hideous Heart, edited by Dahlia Adler, takes that challenge and runs with it. Each of the anthology's contributors revamp or totally reinvent 13 of Poe's best-known stories and poems, imbuing most of them with a much-needed dose of feminism, LGBTQ representation, and racial diversity." --HelloGiggles "In Adler's inclusive anthology, 13 YA authors honor Edgar Allan Poe's pioneering work in mystery, horror, and science fiction with retellings that emphasize diverse characters, settings, and genres. Poe fans new and old will find stories to appreciate here." --Booklist "Thirteen authors reshape short stories by Edgar Allan Poe in a collection that practically pulses with curricular potential. Both well-known works and lesser-known stories are reimagined here, and the retellings echo the suspense, wit, and undeniable sadness that move through the original pieces. Poe's original short stories are all provided in the second half of the book, and any fan of the writer will appreciate these modern takes on the morbid and macabre." --The Bulletin

"Heartbreaking, thrilling, gruesome, and gorgeous: these stories will delight longtime Poe fans just as much as readers who haven't read the classics." --Beth Revis, author of Give the Dark My Love "Beautiful, haunting, and wickedly clever, His Hideous Heart digs deep into the essence of Poe's legendary works and ingeniously reanimates them for modern readers." --Cat Winters, author of The Raven's Tale

Dahlia Adler is an editor of mathematics by day, a blogger by night, and an author of young adult and romance novels at every spare moment in between. Her short stories can be found in the anthologies The Radical Element, All Out, It's a Whole Spiel, and His Hideous Heart. Dahlia lives in New York with her family and an obscene number of books.