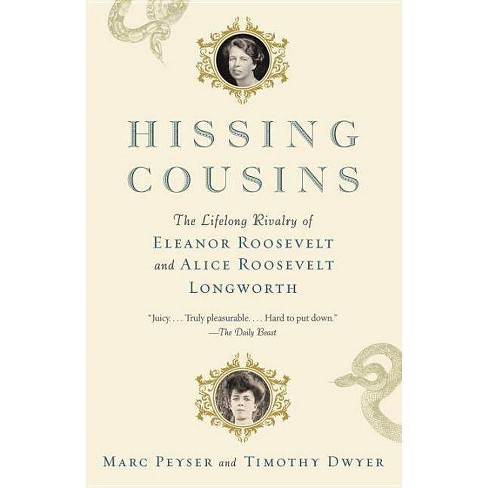 A Richmond Times-Dispatch Best Book of the Year When Theodore Roosevelt became president in 1901, his beautiful and flamboyant daughter was transformed into "Princess Alice," arguably the century's first global celebrity. Thirty-two years later, Alice's first cousin Eleanor moved into the White House as First Lady. The two women had been born eight months and twenty blocks apart in New York City, spent much of their childhoods together, and were far more alike than most historians acknowledge. But their politics and personalities couldn't have been more distinct.
Democratic icon Eleanor was committed to social justice and hated the limelight; Republican Alice was an opponent of big government who gained notoriety for her cutting remarks. The cousins liked to play up their rivalry--in the 1930s they even wrote opposing syndicated newspaper columns and embarked on competing nationwide speaking tours. When the family business is politics, winning trumps everything. Lively, intimate, and stylishly written, Hissing Cousins is a double biography of two extraordinary women whose entwined lives give us a sweeping look at the twentieth century in America.

"Clever, absorbing. . . . Entertaining and often shrewd." --The Washington Post "Juicy. . . . Truly pleasurable. . . . Hard to put down." --The Daily Beast "A compelling drama. . . . The research is thorough and the prose is stylishly authoritative." --The Christian Science Monitor "Encapsulate[s] the sweeping saga of the Roosevelt family." --Chicago Tribune "Moving. . . . Chronicl[es] the childhood losses each endured, and the rich web of family in which they were raised." --The Boston Globe "Ripping but poignant." --Time "Peyser and Dwyer tell the cousins' story with insight, humor, empathy and wisdom. . . . A welcome and absorbing addition to the ever-growing canon of Rooseveltiana." --Richmond Times-Dispatch "An insightful look at two remarkable Roosevelt women. . . . Hissing Cousins unravels the Machiavellian question that would haunt both women in their path to power: is it better to be clever, or is it better to be good?" --The Guardian (London) "A brilliant idea for a book, brilliantly executed. . . . A powerful and entertaining portrait of an important and overlooked American relationship." --Jon Meacham, Pulitzer Prize-winning author of Thomas Jefferson: The Art of Power "Just delicious--sharp, touching, funny, and wise. Marc Peyser and Timothy Dwyer have brought to life a pair of the great women of the twentieth century, in all their human flaws and glory." --Evan Thomas, author of Ike's Bluff: President Eisenhower's Secret Battle to Save the World "This is the beautifully-rendered and absorbing story of the seventy-year family rivalry between two of the most compelling women of the twentieth century--one Democrat, one Republican, both fascinating." --Jonathan Alter, author of The Defining Moment: FDR's Hundred Days and the Triumph of Hope "For much of the twentieth century Eleanor Roosevelt and Alice Longworth defined what it meant to be an influential woman in politics. . . . This part of the grand Roosevelt family saga has rarely been told, and never better." --H. W. Brands, author of Traitor to His Class: The Privileged Life and Radical Presidency of Franklin Delano Roosevelt "One of the most entertaining accounts of serious history I've read, eliciting laughter, groans and ultimately a certain panoramic comprehension." --Diane McWhorter, Pulitzer Prize-winning author of Carry Me Home: Birmingham, Alabama, the Climactic Battle of the Civil Rights Revolution "Marc Peyser and Timothy Dwyer have a can't-miss subject on their hands, and they bring the reader along for an exhilarating ride." --BookPage "Peyser and Dwyer's detailed and witty double biography is hard to put down, a fascinating look at an era and two exceptionally strong, intelligent women." --Booklist (starred)

Marc Peyser is a writer and former deputy editor at both Newsweek and Budget Travel. His whose work has appeared in The New York Times, Life, Vogue, Time, Time Out New York, Condé Nast Traveler, and the Huffington Post. He is currently the deputy editor of All You magazine. Timothy Dwyer was raised on Long Island's Eaton's Neck, swimming distance from Theodore Roosevelt's homestead at Sagamore Hill. He studied history and politics at Georgetown University's School of Foreign Service and at the College of Europe in Bruges, Belgium. His work has appeared in Time, Washingtonian, and online at The Atlantic. He is the chief executive officer of The School Choice Group, an education advisory company.
If the item details above aren’t accurate or complete, we want to know about it. Report incorrect product info.