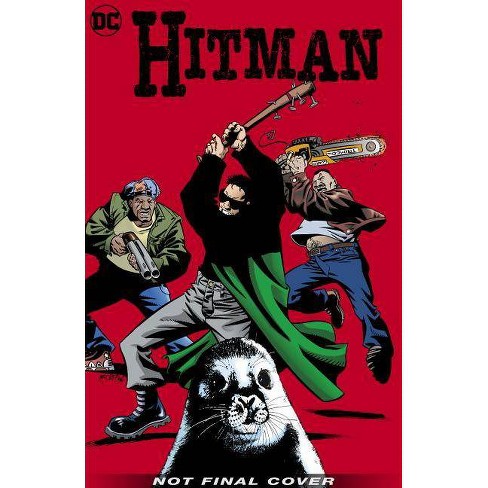 $19.89
MSRP$29.99
0 out of 5 stars with 0 reviews
be the first!be the first! ratings
Shipping
Free standard shipping with RedCard
Help us improve this page

Written by Garth Ennis, whose comics have been adapted into the AMC TV series Preacher and the upcoming Amazon TV series The Boys, Hitman is an action-packed, often funny series starring Tommy Monaghan, a super-powered gun for hire with a heart of gold. His name is Tommy Monaghan, and he kills people for a living--but then again, nobody's perfect. In fact, for a hired killer, Tommy's actually a pretty decent guy. Tommy is good enough at his job that he can pick and choose his contracts and for those that he accepts he follows a strict bad-guys-only policy. Fortunately for him, there's no shortage of lowlifes who fit his criteria in Gotham City's seedy underworld; unfortunately for them, he also has some helpful superpowers--X-ray vision and telepathy--that give him an edge over nearly any opponent, from the lowest street thug to the deadliest super-villain. Of course, the flashier heroes of the DC Universe take a dim view of Tommy's vocational success. But in the tenements and taverns of Gotham's notorious Cauldron district, honor and friendship are more important than moral righteousness--and professional rivalries are a much bigger threat than the forces of law and order. For Tommy and his crew down at Noonan's Bar, dealing with it all--the capes, the gangsters, the mad scientists, and their mutated victims--is just another day at the office. Lovingly crafted by acclaimed comics writer Garth Ennis (Preacher, Hellblazer) and beloved artist John McCrea (The Demon, Superboy), Hitman's Greatest Hits collects over 300 pages of gunslinging adventures from Gotham's second favorite local hero--including the classic tales "Ten Thousand Bullets," "Zombie Night at the Gotham Aquarium," and "Of Thee I Sing." Collects The Demon Annual #2, Hitman #4-7, #13-14, #34, and Justice League/Hitman #1-2.
If the item details above aren’t accurate or complete, we want to know about it. Report incorrect product info.