Hope for This Present Crisis - by Michael Youssef (Hardcover) 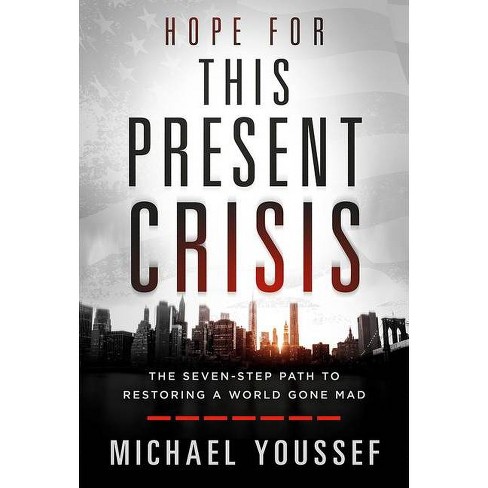 Subtitle on cover: The seven-step path to restoring a world gone mad.

Our culture has lost its mind. Now, we are waging a bigger fight--a war for our soul. Is it possible our world has gone mad? We are under siege and the war is not from without; it is from within. The collapse of the Roman Empire occurred in a single generation and was not so much the result of invasions by their enemies but the result of moral decay and internal corruption. Similar patterns are emerging in America. We neglected or abandoned our traditional institutions long ago, but now it's time to take them back. Today, forces are at work to strip the principles and precepts of faith from public venues or minimize their significance. Many progressive leaders are convinced that when Christianity disintegrates it will create peace on earth. But the loss of our heritage will merely create a spiritual vacuum that will be filled with folly, crammed with chaos, or invaded by Islam. The reality is: Western civilization will become so decadent and reckless that America will collapse like a house of cards. In Hope for This Present Crisis, Dr. Youssef provides a diagnosis of the insanity of the current culture and a seven-step prescription for restoring sanity to a world gone mad. Here's the seven-step path to restoring a world gone mad:

This book will teach you how to stand up to attacks on your faith, and defend Christianity as a meaningful contribution to society.

Dr. Michael Youssef was born in Egypt and lived in Lebanon and Australia before coming to the United States and fulfilling a childhood dream of becoming an American citizen. He holds degrees from Moore College in Sydney and Fuller Theological Seminary in Pasadena, California, and holds a doctorate in social anthropology from Emory University in Atlanta. He founded The Church of the Apostles, which was the launching pad for Leading The Way's international ministry. Dr. Youssef has authored more than forty books, including popular titles such as Saving Christianity? and When the Crosses Are Gone. He and his wife, Elizabeth, reside in Atlanta.
If the item details above aren’t accurate or complete, we want to know about it. Report incorrect product info.