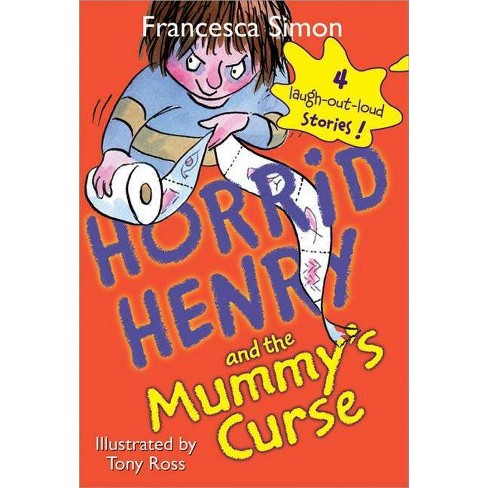 $6.99
undefined out of 5 stars with 0 reviews
be the first!be the first! ratings
Help us improve this page

Horrid Henry indulges in his favorite hobby--collecting Gizmos; has a bad time with his spelling homework; starts a rumor that there's a shark in the swimming pool; and spooks Perfect Peter with the mummy's curse. Illustrations.

Horrid Henry indulges his favorite hobby--collecting Gizmos; has a bad time with his spelling homework; starts a rumor that there's a shark in the swimming pool; and spooks Perfect Peter with the mummy's curse.

Francesca Simon is one of the world's best-loved children's authors. She is the only American to have ever won the Galaxy Book Award, and her creation, Horrid Henry, is the #1 bestselling chapter book series in the UK--with a hit TV show and over fifteen million copies sold! Each book contains four easy-to-read stories and hilarious illustrations by the one and only Tony Ross, so even the most reluctant of readers won't be able to resist Henry's amazing talent for trouble!

"Francesca Simon, author of the Horrid Henry series, does another outstanding job with this one! Each of the four stories are long enough to tell a good story, but short enough to keep the attention of my two boys. They love to hear about what sort of trouble is getting into next. My oldest, John, is still convinced he's Perfect Peter and his younger brother, Justin, is Horrid Henry. Justin doesn't seem to mind! As I've mentioned in the past, the Horrid Henry books are perfect for any child, boy or girl, in the 7-10 age range. But they are particularly great for reluctant readers. The stories and characters engage them and the text isn't challenging. So, like in the past, I HIGHLY HIGHLY recommend this, or any of the Horrid Henry series!
" - Blog

Francesca Simon was born in the United States and attended both Yale and Oxford universities. For ten years she worked as a freelance journalist. She now writes fulltime and has had many books published including the bestselling Horrid Henry series and several picture books. She lives in North London, England, with her husband, Martin, and her son, Josh.

Tony Ross is a prolific illustrator of books for children, including Francesca Simon's Horrid Henry series, Martyn Beardsley's Sir Gadabout stories - as well, of course, as his own stories. Over the past few years, Tony has become one of the best known creators of original and traditional picture books and his work has been sold all over the world. Tony Ross was born on August 10, 1938, in London. He trained at the Liverpool School of Art and has worked as a cartoonist, a graphic designer, as the Art Director of an advertising agency, filmmaker, and as Senior Lecturer in Art at Manchester Polytechnic.