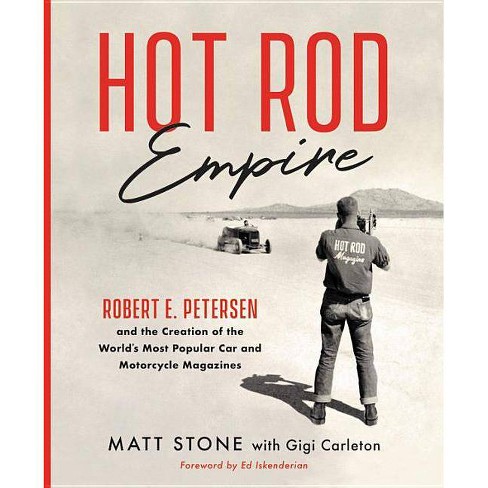 $21.49
MSRP$35.00
no reviews yet
be the first!be the first! ratings
Shipping
Free standard shipping with RedCard
Loading, please wait...
Help us improve this page

Matt Stone (Glendale, California), former executive editor of Motor Trend magazine, has been a professional automotive journalist and photographer since 1985. He has authored and photographed several books, including the bestselling 365 Cars You Must Drive, My First Car, McQueen's Machines, and McQueen's Motorcycles all from Motorbooks.

Gigi Carleton, for more than 40 years, worked at Petersen Publishing Company as Margie and Robert E. Petersen's executive secretary and personal manager. She started there as a temp, working on organizational details for the Motor Trend 500 stock car race, sponsored by Petersen Publishing, at Riverside International Raceway each year. She was then hired by the Petersens as their full time "right arm" in the administration of all executive aspects of the business and many of their personal and philanthropic activities. Post the Petersens' passing, she is now president of the Margie and Robert E. Petersen Foundation, and was lifelong friends with the Petersens.

Ed Iskenderian is one of the founding fathers of the aftermarket speed equipment business, and a worldwide legend in the field of high performance camshaft design and production. "Isky" launched his business in the late 1940s, using a single homebuilt cam grinding machine, in a small, dirt-floored shop in the back of a friend's tool and die company. His Isky Racing Cams, still a world leader in the high performance camshaft business has sponsored many famous, championship winning Bonneville and drag racers, including the late Mickey Thompson and Don "Big Daddy" Garlits. Iskenderian, now 97 years old, still runs the business that bears his name.