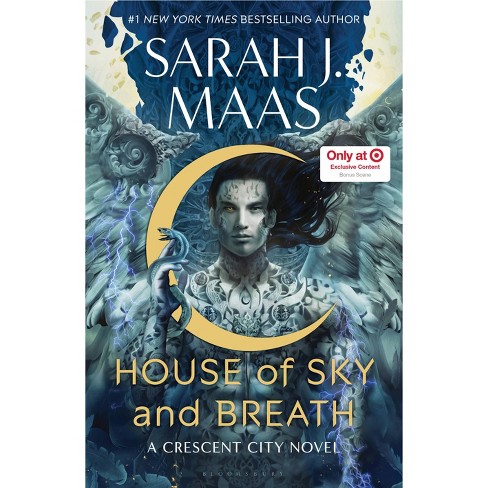 EXCLUSIVE BONUS CONTENT: When Tharion learns a friend may be in danger, he thinks back on the Summit, their chance encounter, and the bond that formed between them.

Bryce Quinlan and Hunt Athalar are trying to get back to normal--they may have saved Crescent City, but with so much upheaval in their lives lately, they mostly want a chance to relax. Slow down. Figure out what the future holds.

The Asteri have kept their word so far, leaving Bryce and Hunt alone. But with the rebels chipping away at the Asteri's power, the threat the rulers pose is growing. As Bryce, Hunt, and their friends get pulled into the rebels' plans, the choice becomes clear: stay silent while others are oppressed, or fight for what's right. And they've never been very good at staying silent.

In this sexy, action-packed sequel to the #1 bestseller House of Earth and Blood, Sarah J. Maas weaves a captivating story of a world about to explode--and the people who will do anything to save it.

Contributor Bio:
Sarah J. Maas is the #1 New York Times and internationally bestselling author of the Throne of Glass, Court of Thorns and Roses, and Crescent City series. Her books have sold millions of copies and are published in thirty-seven languages. Sarah lives with her husband, son, and dog.

Q: Hi! What is the bonus scene included in this Target exclusive? It doesn't say in the product description. Thanks!

submitted by Francine - 1 year ago

Q: Will this book be signed?

submitted by April T - 1 year ago
See all questions (2)

A Touch of Darkness - by Scarlett St. Clair (Paperback)

Kingdom of Ash - Throne of Glass - by Sarah J. Maas

3 out of 5 stars
Would not recommend
Avery - 1 month ago, Verified purchaser
I like probably most only read this book for the ending, I wouldn’t recommend it because I feel like I would rather have someone tell me the ending and have saved me the trouble of reading the 800 pages
Did you find this review helpful?

5 out of 5 stars
Would recommend
Nicole - 10 months ago
Only a third into it so far but it’s so good.
Did you find this review helpful?

YUP THIS IS WHY CRESCENT CITY HAS ALWAYS BEEN MY ALL TIME FAVORITE FANTASY BOOK!!!

5 out of 5 stars
MAY - 11 months ago
SJM's best work yet!!! Without a doubt, my top book of the year. How do you write a review for a book that just ended the way this book ended. You can’t. I’m simply going to say that this book has altered the chemistry of my brain and has changed the trajectory of my life. THAT ENDING PHYSICALLY BLEW MY MIND. I can confidently say that the ending is the most jaw dropping, mind blowing book moment I’ve ever had in a book. If I took my blood pressure right now, I would be considered hypertensive. There’s no way that ending was real. There’s just no way. I’m not sure how I’m supposed to live a healthy lifestyle after reading this. Hunt and Bryce (especially Bryce) own me. I love them so much it hurts. Their love for one another is unmatched. They have such a deeply emotional, past/personal experience-based connection, trust for one another that runs so deep, and they are so obsessed, infatuated, and head over heels in love with each other. It physically pains me because it’s just so beautiful. They are THE soulmates to end all other soulmates. They’ve always been my favorite SJM couple and they continue to keep their spot on the podium.
1 guest found this review helpful. Did you?

5 out of 5 stars
Would recommend
Ellie - 11 months ago, Verified purchaser
I have been waiting so freaking long for this book to come out and i wasnt not disappointed!
Did you find this review helpful?

5 out of 5 stars
Would recommend
Chelsc - 11 months ago, Verified purchaser
Everything about this book is beautiful.
Did you find this review helpful?

5 out of 5 stars
Would recommend
Brooklyn - 1 year ago, Verified purchaser
First of all, the cover is STUNNING. Acotar Will always be my favorite series by her but this really might be her best work!! I’m obsessed
3 guests found this review helpful. Did you?

5 out of 5 stars
Would recommend
livcharles - 1 year ago, Verified purchaser
Sarah can’t write a bad book honestly
8 guests found this review helpful. Did you?