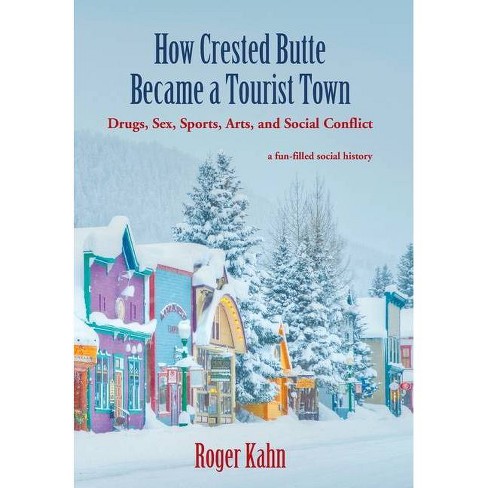 Towns and cities all have a "birth story" but few have as a dramatic and different "rebirth story." After 72 years as a mining town and 10 years as an almost ghost town, "How Crested Butte Became A Tourist Town: Drugs, Sex, Sports, Arts, and Social Conflict," tells the story of a town emerging from its dormant cocoon, struggling to find its identity being pulled from divergent groups from old time miners to the counterculture radicals of the '60s. It reminded me of the HBO superb series "Deadwood" that showed how civilizsation is shaped by strong personalities and the need for some law and order. -- Jim Schmidt, Crested Butte Mayor

Roger Kahn writes a love story to the small town of Crested Butte, Colorado that he discovered in the late 1960s when old miners, young ski bums, wandering hippies, and anoymous outlaws all convened in an idyllic high mountain nirvana that included cheap dope, copious sex and free roaming dogs. He explores a period of time that he claims was as good as remembered and better than pretty much anywhere else in the world.

But that nirvana came with a clash of cultures not just between the old timers and the new pioneers but between the smart, young transplants who disagreed on how to grow the place. Kahn's love story probably describes a number of these wild, small town outposts in the mountains of America as the sport of skiing took hold of the general population in the 60s, 70s and 80s. Roger was fortunate to experience the early days of a special time that has long been abandoned in most of these places and he has the writing skill to bring those days back to life. He delves into the politics of growth and gentrification ... and while making clear the "good times" can never be repeated, he explains how these communities that reflect the libertarian values of the 1960s continue to attract interesting, creative people looking for an alternative lifestyle. -- Mark Reaman, Editor, Crested Butte News

This is a detailed perspective on the transformation and evolution of community. The reader is treated to the spatial, cultural, economic and social elements that shape the places in which we live, work and play. This work reveals the political, personal, and familial challenges that many have endured in their pursuit of "life, liberty and happiness." Finally, the book defines the journey that many communities like Crested Butte have taken, are taking, and will take resulting from the multiplicity of divergent lifestyles and societal norms occurring globally. -- Cederic D. Page, Professor Emeritus of Geography, University of New Mexico, Los Alamos

Drawing on extensive interviews, archival research, and personal experiences, Kahn vividly describes the social forces that defined the 1960s and 70s in Crested Butte. He deftly points his sociologist lens on this pivitol period of Crested Butte history, describing the various factions of people that lived in and moved to town, bringing with them different backgrounds, values, forms of expression and visions for the future. Kahn shows how the conflicts and collaborations between these factions shaped Crested Butte's evolution into the tourist destination and recreation exurb that it is today. A must read for anyone interested in the history of Crested Butte, the US counterculture, and an engaging read about a wild time in a wild place. - -- Shelley Popke, Executive Director, Crested Butte Mountain Heritage Museum