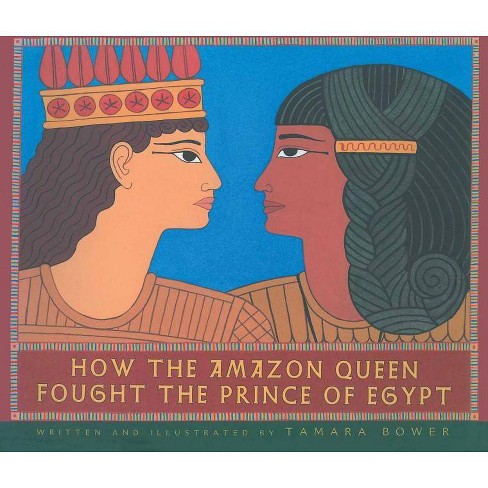 CAN WOMAN EVER CONQUER MAN?
Queen Serpot rules the Land of Women, where the Amazon women live free, without men, and hunt and fight their own battles. But one day their peace is broken. An army of Egyptian soldiers is approaching their land, led by their prince, Pedikhons.
Pedikhons has heard stories of these warrior women. Now he has come to see them with his own eyes -- and to challenge them to combat. But the brave Serpot and her women are full of surprises. Can woman truly equal man in strength and courage?
This story of love and war is based on an actual Egyptian scroll from the Greco-Roman period. Hieroglyphic translations of key phrases, intricate paintings in the Egyptian and Assyrian styles, and extensive notes about both cultures enrich this fascinating, untold legend.

Tamara Bower has been creating art all her life, encouraged by her mother, an artist. Ms. Bower first became interested in ancient Egypt at age ten, checking out every book on the subject in her school library.
She learned archaeological illustration at the Metropolitan Museum of Art, and later drew pictures for the Egyptian Department of the Brooklyn Museum of Art. She has assisted many scholars and worked on-site at excavations in Egypt, Turkey, Spain, and California. Her first book was The Shipwrecked Sailor, published by Atheneum in 2000.
Born and raised in Los Angeles, California, Ms. Bower now lives with her cat, Tennessee, in New York City
If the item details above aren’t accurate or complete, we want to know about it. Report incorrect product info.