How to Kill Your Best Friend - by Lexie Elliott 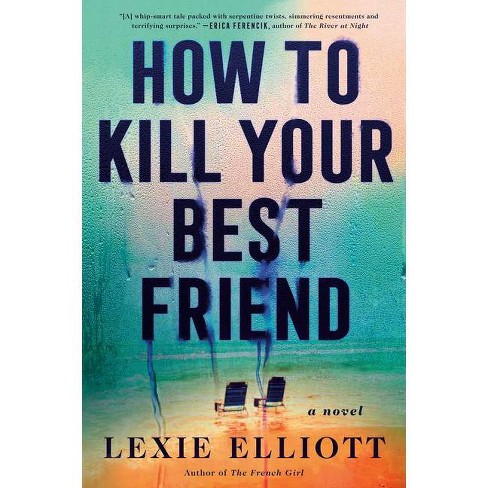 "If you suspected your best friend, the person you were closest to in the whole world, was a murderer, what would you do? Would you confront her? Would you help keep her secret? Or would you begin to feel afraid? Most importantly, why don't you feel safe now that she's dead? From the author of The French Girl comes a novel full of secrets, suspense, and deadly twists."--

If you suspected your best friend, the person you were closest to in the whole world, was a murderer, what would you do? Would you confront her? Would you help keep her secret? Or would you begin to feel afraid? Most importantly, why don't you feel safe now that she's dead? From the author of The French Girl comes a novel full of secrets, suspense, and deadly twists. Georgie, Lissa, and Bronwyn have been inseparable since dominating their college swim team; swimming has always been an escape from their own problems, but now their shared passion has turned deadly. How can it be true that Lissa, the strongest swimmer they know, drowned? Granted, there is something strange about Kanu Cove, where Lissa was last seen, swimming off the coast of the fabulous island resort she owned with her husband. Lissa's closest friends gather at the resort to honor her life, but Georgie and Bron can't seem to stop looking over their shoulders. Danger lurks beneath the surface of the crystal-clear water, and even their luxurious private villas can't help them feel safe. As the weather turns ominous, trapping the funeral guests together on the island, nobody knows who they can trust. Lissa's death was only the beginning....

An intricate, twisting story... a suspicious death is only one of the secrets among a group of old friends on an isolated island.--Shelf Awareness

"Elliott...outdoes herself here. Readers might feel like they need a notebook to keep track of the threads of the complex plot: who has a secret history with whom, who has been telling lies about what, who really knows what happened on the day Lissa disappeared? Revelation follows revelation, with the pace increasing as the mysteries pile up, leaving us genuinely shocked at the end. A rousing success."―Booklist "Utterly unnerving and completely engrossing."―PopSugar "...the twisty plot reaches a satisfying resolution. Elliott makes her characters feel like real people. Fans of Lucy Foley's The Guest List will be compulsively turning pages."―Publishers Weekly (starred review) "Slyly escalating head games that will make you think twice about booking that next getaway."―Kirkus Reviews "Elliott's latest (after The Missing Years) is a great thriller with lots of red herrings and a blindsider of a twist ending."―Library Journal "[A] whip-smart tale packed with serpentine twists, simmering resentments, and terrifying surprises. Not only will you want to skip the midnight swim, you may never look at your BFF the same way again."--Erica Ferencik, author of The River at Night Praise for The Missing Years Begins with a Gothic hint that rapidly segues into a suspenseful thriller with a breathless twist of denouement.--New York Journal of Books Elliott follows up her well-reviewed debut, The French Girl, with an equally atmospheric novel that keeps the reader intrigued and off-balance all the way through.--Booklist The whip-smart Ailsa's descent into terror and confusion as the Manse begins to have its effect on her is played out beautifully...this manages to be both uncannily creepy and grounded in the true horror of human evil.--The Guardian

Praise for The French Girl The French Girl commands attention. The author provides the perfect dose of character development before unveiling eerie details from her cast's past, ensuring that we're properly unnerved when their lives begin to unravel.--The Associated Press A gripping mystery that delves into the past and the darker side of friendships, this book will have you questioning everything you think you know.--Megan Miranda, New York Times bestselling author of The Perfect Stranger Additional praise for Lexie Elliott Scottish debut novelist Elliott, who holds a doctorate in theoretical physics from Oxford, launches a fiction-writing career with a smart, suspenseful thriller.--Booklist An astonishing psychological thriller.--Fresh Fiction You shouldn't have any trouble picking up Lexie Elliott's debut novel, The French Girl. It comes with a warning, though, because you will definitely have trouble putting it down.--Richmond Times-Dispatch The shifting dynamics within the group will keep the reader guessing until the end. First novelist Elliott has done a phenomenal job of combining a whodunit with a Big Chill vibe.--Library Journal (starred review)

Lexie Elliott grew up in Scotland, at the foot of the Highlands. She graduated from Oxford University, where she obtained a doctorate in theoretical physics. A keen sportswoman, she works in fund management in London, where she lives with her husband and two sons. The rest of her time is spent writing, or thinking about writing, and juggling family life and sport.
If the item details above aren’t accurate or complete, we want to know about it. Report incorrect product info.