How to Solve a Problem - by Ashima Shiraishi (Hardcover) 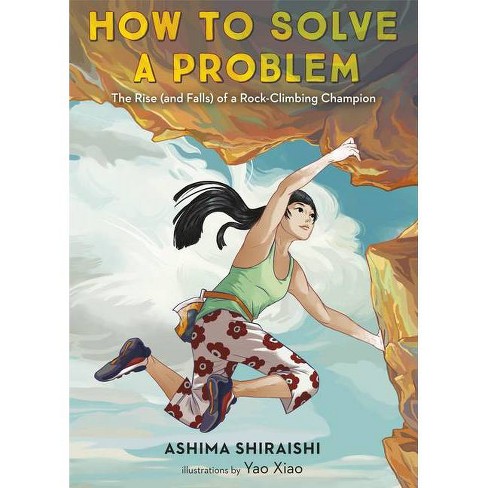 Describes solving a complex problem in terms of rock climbing, which may include false starts, breaking the challenge into smaller parts, and always being thoughtful and persistent.

From Ashima Shiraishi, one of the world's youngest and most skilled climbers, comes a true story of strength and perseverance--in rock climbing and in life. To a rock climber, a boulder is called a problem, and you solve it by climbing to the top. There are twists and turns, falls and scrapes, and obstacles that seem insurmountable until you learn to see the possibilities within them. And then there is the moment of triumph, when there's nothing above you but sky and nothing below but a goal achieved. Ashima Shiraishi draws on her experience as a world-class climber in this story that challenges readers to tackle the problems in their own lives and rise to greater heights than they would have ever thought possible.

"Both a riveting narrative and an excellent guide for young readers to try, try again." --Kirkus Reviews, starred review "Cleanly outlined forms and intensely saturated hues show Ashima honing analytical skills whose power reaches beyond the climbing wall to the rest of life." --Publishers Weekly, starred review "[Ashima's] beliefs in learning from each fall and that learning from failure is a superpower are sure to empower any person facing a problem. Engrossing and inspiring." --Booklist "An inspiration to young readers."--School Library Journal

Ashima Shiraishi started climbing at the age of six, and today she is one of the best climbers in the world. She is the first and only female climber ever to ascend a V15 bouldering problem, earning praise from Outside magazine as a young crusher and the New York Times as a bouldering phenom. This is her first picture book. Yao Xiao is a China-born illustrator based in New York City. Her work has appeared in Time, EW, National Geographic, and The Wall Street Journal, among other outlets, and she is also the author of the monthly web comic Baopu. This is her first picture book.
If the item details above aren’t accurate or complete, we want to know about it. Report incorrect product info.