I Am Flying Into Myself - by Bill Knott (Paperback) 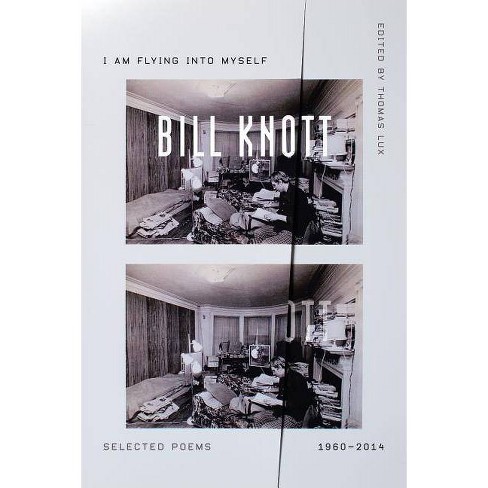 $12.29
MSRP$16.00
no reviews yet
be the first!be the first! ratings
Shipping
Free standard shipping with RedCard
Loading, please wait...
Help us improve this page

"Remarkable . . . Colored with the originality and lyrical nimbleness . . . This book serves as a treasury of Knott's colossal talent--a true treasury, which merits being treasured for the way it showcases the range and consistently high quality of his poetic output . . . Lux's conversational and comprehensive introduction provides immense and balanced insight into Knott the person and Knott the poet . . ." --Kathleen Rooney, New York Times Book Review

"His insurgent D.I.Y. purity is on full display in I Am Flying Into Myself . . . Knott's poems claim a peculiar kind of privacy, as though he confiscated his lines from public view in order to mete them out on his own stubborn terms. The result is a tangle of sweetness, irritability, hospitality, and paranoia . . ." --Dan Chiasson, The New Yorker

"I felt surges of jealousy over the simple brilliance of his comparisons. No modern poet I know shuffles together such tenderness of heart with such wild metaphoric play . . . As eccentric in his life as his poems are on the page, Knott has often been considered an acquired taste, but this substantial gathering, carefully edited by Thomas Lux, should secure for Knott an undeniable place on the map of American poetry." --Billy Collins, New York Times Book Review, Year in Reading

"He wrote some of the most brilliant, strange, and subversive poetry America has ever seen. This posthumous selection is an attempt by Knott's longtime friend, the poet Thomas Lux, to organize his legacy and make it presentable. Perhaps something essential is lost in curtailing the chaos that Knott himself created, but we are also profoundly lucky not to have this extraordinary body of work cast into oblivion."
--Craig Morgan Teicher, NPR Books

"This was the collection many of us had long been waiting for . . . Knott's poems relentlessly compress language and his lines distill to their throbbing quick." --Janaka Stucky, Publishers Weekly

"I Am Flying into Myself brings Bill Knott's natural surrealism into acute focus, and Thomas Lux's introduction makes this doubly true. This visionary is homegrown, of Midwestern soil; he surprises in an original language and sentiment. Always youthful, playful and dead serious, he teases us: "Going to sleep, I cross my hands on my chest./They will place my hands like this./It will look as though I am flying into myself." There's no other poet like Bill Knott, and this selection of his poems is a windfall for anyone who dares to embrace this eccentric voice made in America."
--Yusef Komunyakaa

"Bill Knott, audacious, a meteor shower of contradictions, infuriating enough to piss off the Good Humor man, a great deadpan comic, and, the jury is in, a poet 24/7. Thomas Lux does Knott the honor of not setting the crooked straight. I Am Flying into Myself is Knott alive, thorns and all."
--William Corbett

"Bill Knott was one of the very best American poets of the past fifty years, and book gives proof of that. He is also one of the most original poets of that period, able to make readers laugh or cry or scratch their heads, often all at the very same time." --Stephen Dobyns

"Bill Knott's poems are the poems of a genius imagination that wrestles with terror, hilarity, and humanity. Knott is a moral poet, by which I mean his poems are never merely funny or decorative. He nails his syllables with determination and grace creating great poems that speak, unfiltered and unmitigated, to America. Guided by Thomas Lux's brilliant and kind introduction, Bill Knott's I Am Flying into Myself is a beloved compilation."
--Denise Duhamel

"The two great lyric forces, music and imagination, propel these poems--purely, with no puffed-up baloney or low calculation. A bracing, as well as heartbreaking, book of poems, beautifully selected and framed." --Robert Pinsky

"Thomas Lux's selection perfectly represents the legacy of Bill Knott, a poet like no other whose work brilliantly displayed his many sides--morose and zany; tender and grave; pained and playful; passionate, compassionate, and scathingly satirical--they are all here, buoyant with Knott's unmistakable lilt despite the storms in his heart." --John Skoyles

"Bill Knott writes stunning poems in which he wires the head to the heart in such surprising ways that the results are truly electrifying. More than anyone of his generation, he shows us just how wild American poetry can be." --Billy Collins

"The man Richard Hell described as 'a perfect asshole wonderpoet' was always an outlier. His work is tender, strange, deeply pained, and full of wit. He owes a little coin to Hopkins, a little to several others, no doubt, but Knott, in the end, is sui generis. To encounter his spirit in this collection is to recognize what one poem calls "devastating sentience." Thomas Lux has curated a valuable exhibit of Knott's dioramas, most of them smaller than your hand. Reach out and taste them."
--Kim Addonizio