I Am Gandhi - (Ordinary People Change the World) by Brad Meltzer 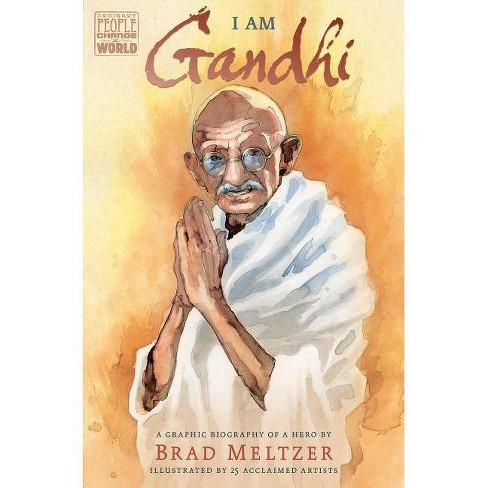 A short biography of the man who most inspired the Indian revolt against British rule.

Twenty-five exceptional comic book creators join forces to share the heroic story of Gandhi in this inspiring graphic novel biography. As a young man in India, Gandhi saw firsthand how people were treated unfairly. Refusing to accept injustice, he came up with a brilliant way to fight back through quiet, peaceful protest. He used his methods in South Africa and India, where he led a nonviolent revolution that freed his country from British rule. Through his calm, steady heroism, Gandhi changed the lives of millions and inspired civil rights movements all over the world, proving that the smallest of us can be the most powerful. Galvanized by Gandhi's example of gentle, peaceful activism, New York Times bestselling author Brad Meltzer asked his friends in the comic book world to help him make a difference by creating this philanthropic graphic novel. Twenty-four illustrators--including many of the most acclaimed artists in comics today--enthusiastically joined the project, agreeing to donate their work so that their royalties can go to Seeds of Peace, a non-profit organization that inspires and cultivates new generations of global leaders. This extraordinary biography is a glorious team effort that truly exemplifies Gandhi's selflessness and love for humanity. The illustrators included are: Art Adams, John Cassaday, Jim Cheung, Amanda Connor, Carlos D'Anda, Michael Gaydos, Gene Ha, Stephanie Hans, Bryan Hitch, Phil Jimenez, Siddharth Kotian, David LaFuente, David Mack, Alex Maleev, Francis Manapul, David Marquez, Steve McNiven, Rags Morales, Saumin Patel, Nate Powell, Stephane Roux, Marco Rudy, Kamome Shirahama, Bill Sienkiewicz, and Abhishek Singh.

Brad Meltzer is the author of the New York Times bestselling Ordinary People Change the World series for children, as well as six New York Times bestselling thrillers for adults: The Tenth Justice, Dead Even, The First Counsel, The Millionaires, The Zero Game, and The Book of Fate. He is also the #1 bestselling author of the critically acclaimed comic books Identity Crisis and Justice League of America, and is the cocreator of the TV series Jack & Bobby. A graduate of the University of Michigan and Columbia Law School, he lives in Florida. To learn more, visit bradmeltzer.com.
If the item details above aren’t accurate or complete, we want to know about it. Report incorrect product info.