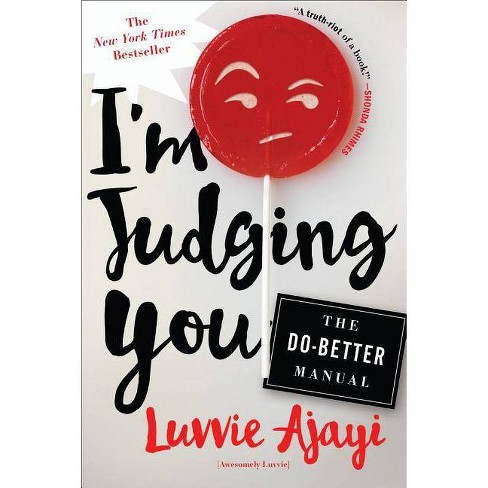 "I'm Judging You is [blogger Luvvie Ajayi's] debut book of humorous essays that dissects our cultural obsessions and calls out bad behavior in our increasingly digital, connected lives--from the importance of the newest Shonda Rhimes television drama to serious discussions of race and media representation to what to do about your fool cousin sharing casket pictures from Grandma's wake on Facebook"--

New York Times Bestseller
#1 Washington Post Bestseller
Redbook "20 Books By Women You Must Read this Fall"
GoodHousekeeping.com "17 New Best New Books to Read This Fall"
BookRiot "100 Must-Read Hilarious Books"
Goodreads Choice Awards Finalist
Now in development with Shondaland and ABC Signature Studios as cable television series Comedian, activist, and hugely popular culture blogger at AwesomelyLuvvie.com, Luvvie Ajayi, serves up necessary advice for the masses in this hilarious book of essays With over 500,000 readers a month at her enormously popular blog, AwesomelyLuvvie.com, Luvvie Ajayi is a go-to source for smart takes on pop culture. I'm Judging You is her debut book of humorous essays that dissects our cultural obsessions and calls out bad behavior in our increasingly digital, connected lives. It passes on lessons and side-eyes on life, social media, culture, and fame, from addressing those terrible friends we all have to serious discussions of race and media representation to what to do about your fool cousin sharing casket pictures from Grandma's wake on Facebook. With a lighthearted, razor sharp wit and a unique perspective, I'm Judging You is the handbook the world needs, doling out the hard truths and a road map for bringing some act right into our lives, social media, and popular culture. It is the Do-Better Manual.

The Internet's newest comic phenom . . . . She has been hailed by Bono and Shonda Rhimes for her singular voice and stinging political commentary...You may not have heard her name yet. But you probably will, because Luvvie Ajayi, a Nigerian-born professional shade thrower, as she calls herself, is offering incisive, hilarious commentary on polarizing issues (race and gender in particular), and she has found her audience.
--Judith Newman, The New York Times

This truth-riot of a book gives us everything from hilarious lectures on the bad behavior all around us to razor sharp essays on media and culture. With I'm Judging You, Luvvie brilliantly puts the world on notice that she is not here for your foolishness -- or mine.
--Shonda Rhimes, New York Times bestselling author of Year of Yes and executive producer of Scandal and Grey's Anatomy I don't know how Luvvie Ajayi got so smart so young about so many things, from feminism to social media, from the pervasiveness of rape culture to the excellence of Red Lobster's Cheddar Bay Biscuits. I'm just grateful she has chosen to share her wisdom with the rest of us in this warm and witty book. The world is going to love it!
--Jennifer Weiner, #1 New York Times bestselling author of Best Friends Forever You will love Luvvie Ajayi's I'm Judging You, and you will argue with it, laugh hysterically at it, shout AW HELL YES at it, and carry parts of it in your heart to dissect or inspire...Perfect for starting important and meaty discussions about all of the topics your mama told you never to bring up at polite dinner parties...religion, race, relationships, reality tv. Read the book. Have the discussions. You'll be better for it.
--Jenny Lawson, New York Times bestselling author of Furiously Happy "I'm Judging You is whip-smart, take-no-prisoners hilarious."
--ChicagoTribune "Humor writing at its best. . . . A truth serum tempered with the bite of laugh."
--NBCBLK(NBC News) "Luvvie Ajayi calls out everybody on their bad behavior . . . but she does it with such a light and funny touch that you can't help but laugh even as you learn."
--Goodhousekeeping.com "Hilarious and perceptive."
--PopSugar "The ultimate handbook on the dos and don'ts of socially navigating the digital era. Brilliantly witty and heartful."
--Redbook Magazine "Reflects Ajayi's spunky personality and hilarious commentary."
--The Huffington Post A smart, vividly humorous handbook...Overall, [Ajayi's] "do-better" calls for us to reclaim common sense, compassion, and critical thinking, in both personal and online interactions. Astute and timely advice, wittily presented.
--Booklist, starred review By exposing the uncool, unwashed underbelly of American society, Ajayi's essays force readers to reconsider their stances on a variety of issues, including social media and the public airing of everything, celebrities, sex tapes, the various types of friendships one might have, feminism, religion. Be prepared for some laughs, but also be prepared to think and confront tougher issues.
--Kirkus

Ajayi writes with humor and intelligence about a range of topics . . . . Her honesty makes the book worth reading.
--Publishers Weekly I could NOT stop laughing. Luvvie has a way of tapping into the universal things that make us all suck at being people. EVERY person needs to keep I'm Judging You on them at all times just to avoid being terrible. I know I will.
--Issa Rae, author of The Misadventures of Awkward Black Girl When I heard Luvvie was writing a book, I knew the following things would happen as surely as day follows night: I would read it, and I would love it...Luvvie is correct about more things more often than any single human woman has the right to be, and has the most stylish and deft command of language this side of P.G. Wodehouse. I like her immensely for it, and I wish I could read I'm Judging You for the first time again. I have been chided by the best, and I love it.
--Mallory Ortberg, bestselling author of Texts from Jane Eyre

I'm Judging You is a brilliant, laugh-out-loud manual for the generation that can configure a wireless router but still hasn't realized social media is not the place for child support issues. It's the tough and tender love letter everyone should be forced to read before they take their first selfie.
--Angela Nissel, author of The Broke Diaries and Mixed

Luvvie Ajayi is an award-winning writer, pop culture critic, and professional troublemaker who thrives at the intersection of comedy, technology and activism. She is the person who often says what you're thinking but dared not to because you have a filter and a job to protect. She is also a digital strategist, noted speaker and Executive Director of The Red Pump Project, a national HIV/AIDS organization.
If the item details above aren’t accurate or complete, we want to know about it. Report incorrect product info.