I'm the Biggest Thing in the Ocean! - by Kevin Sherry 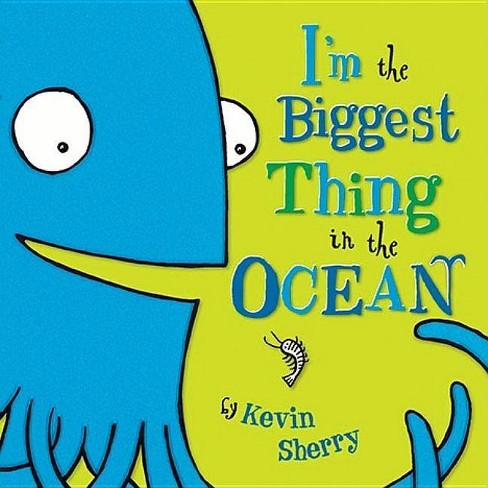 When a giant squid takes inventory of all the creatures in the ocean, he realizes that he's much bigger than most of them, and soon his ego is the biggest thing of all. Full color.

Kevin Sherry's unabashed squid may be the biggest thing in this catalog, but he's not too big for even the littlest kids to love. As the hubristic squid goes about bragging, babies and toddlers will get an eyeful of undersea life--from shrimp and jellyfish to turtles and more. With its snappy text and bright, bold artwork, this winning modern classic is guaranteed to have even the youngest of readers grabbing at pages and laughing along.

Waves of exuberance flow out of this crowd-pleaser, in which a squid proudly points out how much bigger it is than any shrimp, clam, octopus or fish in the neighborhood. --Kirkus Reviews, starred review

"Sherry renders his hero and habitat in bright colors and bold, simple shapes that will be surefire eye magnets for preschoolers...."

Kevin Sherry is an artist, designer, and the cofounder of SquidFire, an online apparel company which features his unique wearable art. Kevin Sherry lives in Baltimore, Maryland, conveniently close to his deep sea friends.
If the item details above aren’t accurate or complete, we want to know about it.

Ocean!: Waves for All - (Our Universe) by Stacy McAnulty (Hardcover)

A First Book of the Sea - by Nicola Davies (Hardcover)

Sir Ladybug and the Bookworms - by Corey R Tabor (Hardcover)

I'm the Biggest Thing in the Ocean! - by Kevin Sherry (Hardcover)

Biggest Thing of All - by Kathryn Thurman & Romina Galotta (Paperback)

Is a Blue Whale the Biggest Thing There Is? - (Wells of Knowledge Science) by Robert E Wells (Paperback)

I'm the Best Artist in the Ocean! - by Kevin Sherry (Hardcover)

What The Seal Saw - by Sherry McMillan