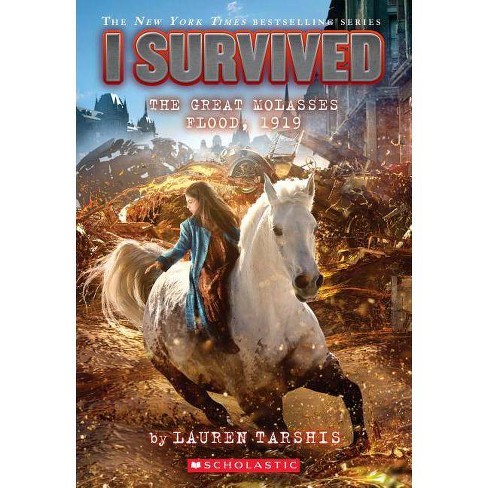 When the massive metal tank filled with sticky brown molasses that rises up over her crowded North End neighborhood explodes, young Carmen must fight for her life, as a tsunami of molasses rushes through the streets.

One hundred years ago, a killer wave of molasses struck a crowded Boston neighborhood. Discover the story of this strange disaster in the next book in the New York Times bestselling I Survived series.It's been four years since Carmen and Papa moved from Italy to Boston. Life here is exciting, but not always easy. And then there's the massive metal tank that rises up over their crowded North End neighborhood. The ugly tank, filled with sticky brown molasses, has always leaked. But nobody imagined that it could one day explode apart, sending a tsunami of molasses into the streets. Caught in the flood, Carmen must fight for her life - the life that she and Papa built together in America. But where will she find the strength?

Praise for I Survived the American Revolution, 1776:

Praise for I Survived the Destruction of Pompeii, AD 79:

Tarshis serves up another gripping adventure... with the light-speed pacing and death-defying maneuvering fans have come to expect. -- Booklist

Praise for I Survived the Battle of Gettysburg, 1863:

Praise for I Survived Hurricane Katrina, 2005:

Expressive illustrations capture the drama of the storm and its aftermath, but the book's real power comes from its exploration of what it means to be a hero. --Booklist

Praise for I Survived the Shark Attacks of 1916:

A gripping story that will hold the interest of reluctant readers. -- School Library Journal

Praise for I Survived the Sinking of the Titanic, 1912: