If I Found a Wistful Unicorn - by Ann Ashford (Hardcover) 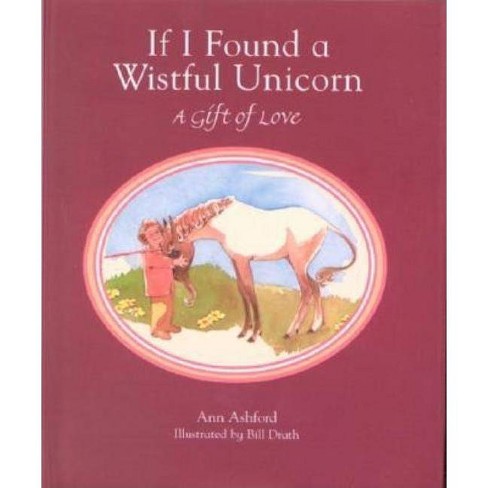 If his friend answers yes to any of his questions, then a boy will know his friend loves him.

What would you do if you found a wistful unicorn?
With a touch as gentle as the soft brush of a butterfly's wing, If I Found a Wistful Unicorn tells the story of a relationship. The disarmingly simple text goes straight to the heart of what love really is. Through thoughtful and fanciful questions, author Ann Ashford explores what we risk for love and what special rewards may be waiting for us in return.
Bill Drath's subdued watercolor illustrations perfectly capture the text's gentle tone and important message. This book is meant for sharing with those special ones who touch your life.

A plethora of thoughtful propositions. . . coupled with breezy watercolors. . . just right for presenting to someone special.--Publishers Weekly

Ann Ashford graduated from Agnes Scott College and was a United Methodist Church worker for migrants, a welfare case worker, a teacher, an actress, and vice-president of a fundraising consulting firm. She passed away in 1988. Bill Drath was a graduate of the University of Wisconsin and served in the Army during World War II (earning a Bronze Star) and the Korean War, retiring in 1966 as a lieutenant colonel. The illustrator of several books, he passed away in 1991.
If the item details above aren’t accurate or complete, we want to know about it.

In My Heart (Hardcover) by Jo Witek

The Summer We Found the Baby - by Amy Hest (Paperback)