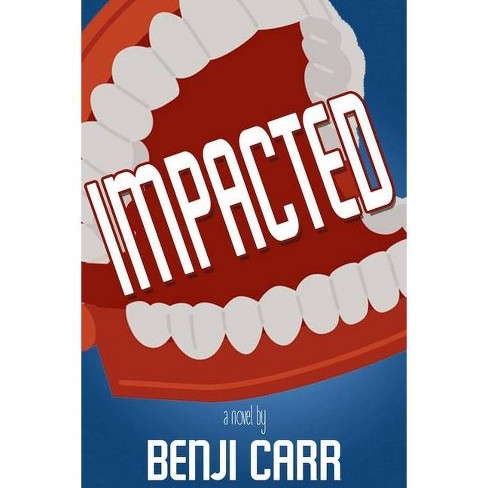 With every trip he makes to the dentist, Wade's pain only gets worse. His smile has faded. He's clenching his jaw and grinding his teeth more, not because of bad oral hygiene or any mishaps in orthodontics. Wade's teeth don't need straightening out, but the rest of his life could use that kind of adjustment. Wade has fallen in love with handsome Dr. Emmett, and their office visits in the afternoon have become decidedly more personal than professional. And poor Wade is sure his girlfriend Jessa would punch him in the mouth if she found out. After all, Jessa did just abandon her church and her family to be with him. And she did just have Wade's baby. So their relationship has already caused enough gossip in the small Georgia town of Waverly. When Wade tries to end the affair, the breakup takes a brutal turn, leaving Wade in a state of panic. His life is under threat. His secrets could be exposed, and his family may fall apart before he realizes what kind of person he wants to be.

"You could read Benjamin Carr's edge-of-your-seat novel as a thriller, with all the twists and gut-punches you crave. You could read it as a kind of Rashomon deep dive into the lives and moral choices of a cast of characters who might seem like you and me...but, trust me, who aren't. But the surest way to appreciate what Carr manages in this riveting debut is to see in IMPACTED a coming-of-age story unlike any you have read before. You might not quite believe what young Wade Harrell lives through in just twenty-four hours but, once you finish the book, you're not likely ever to forget him."--Jonathan Rabb, author of AMONG THE LIVING and THE BERLIN TRILOGY

"A consistently surprising, twist-filled, emotionally resonant treat! I never knew a trip to the dentist could be so insanely entertaining!"--Jeff Strand, author of PRESSURE

"Benji Carr's mesmerizing debut novel, IMPACTED, a thriller wrapped up in a coming of age, is a heartfelt cautionary tale about secrets and lies, the ties that bind and those we get bound up in. You will root for the sensitive, befuddled protagonist Wade, who is having a rough time juggling the responsibilities of new fatherhood, mourning his own father, and being thrust into exploring his sexuality. In swift punchy prose, Carr has written an unputdownable novel about exploitation and how easily a life can derail and the ways in which second chances become possible, or not."--Soniah Kamal, award-winning author of UNMARRIAGEABLE

"Georgia scribe Benji Carr isn't just breaking down barriers with his bullet train of a novel, IMPACTED, he's kicking them in with steel-toed boots. Carr takes the modern thriller to a higher level that challenges the reader to step out of their comfort zone and grab the tail end of a goddamn lightning bolt. Novels like IMPACTED are not written to be fodder for pop culture, then put back on the shelf. They are written to blow open the status quo, like a chunk of literary C4, and force the reader to think - while their heart pounds harder and faster with every turn of the page. If a new and fiercely original voice in fiction is something that interests you, try on some Benji Carr. IMPACTED knocked my dick in the dirt. And I'm sure this is just the beginning."--Brian Panowich, award-winning author of HARD CASH VALLEY, LIKE LIONS, and BULL MOUNTAIN

"Wade Harrell is the kind of protagonist you want to slap some sense into before giving him a hug and some words of wisdom, except none of us, hopefully, has ever faced the hilarious and outrageous problems that author Benji Carr keeps throwing at Wade. So the best advice for Wade might be 'Good luck, and don't do anything stupid!' Of course, Wade won't listen. Carr's darkly comic yet heartfelt storytelling allows us to laugh at Wade while also empathizing with him, and the perspectives of other characters help us better understand Wade and remind us that, while everyone struggles one way or another, it's better to struggle together than on our own."--Christopher Swann, author of NEVER TURN BACK

"With IMPACTED, Benji Carr delivers an emotional roller coaster of a debut that challenges the reader's impressions of abuse, sexuality, and survival. With the confidence of a master storyteller, the humor of a seasoned satirist, and the insight of a keen observer of the human condition, Carr serves notice that he is here to stay."--Zachary Steele, author of THE WEIGHT OF ASHES

"IMPACTED is a wise, wicked noir that will set your teeth on edge. Benji Carr has some seriously dark and funny chops."--Andy Davidson, author of THE BOATMAN'S DAUGHTER

"Like a shot of novocaine, Benji Carr injects his novel with enough pitch black comedy to take all my pain away. Impacted had my jaw on the floor, either from laughter or sheer gob-smacking shock. Pray you remember to grab your own mandible back up once you've finished reading this hilarious debut novel."--Clay McLeod Chapman, author of WHISPER DOWN THE LANE and THE REMAKING

"The characters are outrageous, intense, and totally believable and the story keeps you riveted till the end. It was a pure delight to read."--Jessica Nettles, author of CHILDREN OF MENLO PARK

"A darkly comic novel by a wildly talented new voice. For better or for worse--I'll never go to the dentist again without thinking about this book."--Colleen Oakley, USA Today bestselling author of YOU WERE THERE TOO

As a child growing up in the South with cerebral palsy, Benji Carr developed an eye for the bizarre and quirky, which provided all of the stories he told his friends and family with a bit of flavor. Working as a journalist, storyteller and playwright, his work - whether the stories be personal tales of struggle and survival or fiction about cannibal lunch ladies, puppet romances, drag queen funerals, and perverted killer circus clowns - has been featured in The Guardian, ArtsATL and Pembroke Magazine. Onstage, his pieces have been presented at the Center for Puppetry Arts, Alliance Theatre, and as part of the Samuel French Off-Off Broadway Short Play Festival in Manhattan. He lives in Atlanta and helps run the online literary magazine, Gutwrench Journal. Impacted is his first novel.
If the item details above aren’t accurate or complete, we want to know about it. Report incorrect product info.