Imprison the Sky - (Elementae) by A C Gaughen (Hardcover) 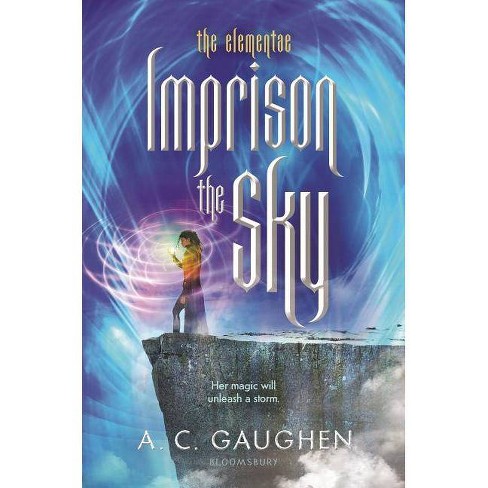 $11.99
MSRP$18.99
no reviews yet
be the first!be the first! ratings
Shipping
Free standard shipping with RedCard
Loading, please wait...
Help us improve this page

"Gaughen weaves big concepts into the action-filled story. . . . Powerful young women who have hope and agency to change the world: What could be more timely?" --Kirkus Reviews

"Aspasia is a bold, complex heroine. . . . A deliciously satisfying romance of mutual support and dedication to hope, joy, and art as essential components of resistance." --BCCB

"A series opener with depth. . . . Gaughen delivers an emotionally resonant tale full of magic so powerful it can move the earth; rich writing and worldbuilding will appeal to readers seeking complex characters, palace intrigue, and weighty questions of power and loyalty." --Starred review, Publishers Weekly on REIGN THE EARTH

"A tale of staggering magic, cutthroat royalty, and lethal intrigue. . . . Gaughen weaves a compelling feminist fantasy. Shalia is a refreshingly strong heroine with a voice that leaps off the page. Her story will both break readers' hearts and urge them onward, anxious to know how Shalia grapples with her destiny." --Booklist on REIGN THE EARTH

"A manifesto of female strength. . . . The readers who flock to this will find more than they expected, and Shalia's strength will give them something truly worth swooning over." --Kirkus Reviews on REIGN THE EARTH

"Another fantasy romance in the vein of books by Sabaa Tahir, Renee Ahdieh, and Sarah Maas, this volume will have teens clamoring for a sequel. Shaila matures from a frightened girl in a foreign land to a woman unwilling to allow her destiny or desires to be controlled by the men around her." --School Library Journal on REIGN THE EARTH

"The intense action scenes and Shalia's strong narrative voice keep the reader on edge and engaged." --School Library Connection on REIGN THE EARTH

"Shalia's story unfolds slowly, smoldering before it rages into an enormous fire. It builds in a powerful way, drawing the reader into a larger plot than they ever expected. . . . Reign the Earth is sure to inspire a dedicated fan base eager for the next tale." --Foreword Reviews on REIGN THE EARTH

"With a clever, strong-willed heroine, a downright terrifying villain, and complex relationships that leap off the page, Reign the Earth is the feminist fantasy I didn't know I needed. I will be thinking about Shalia's strength and fearlessness (and swooning over the slow-burn romance) as I anxiously await book two!" --Erin Bowman, author of VENGEANCE ROAD on REIGN THE EARTH