In the Trenches - (Secondhand Heroes) by Justin Larocca Hansen (Paperback) 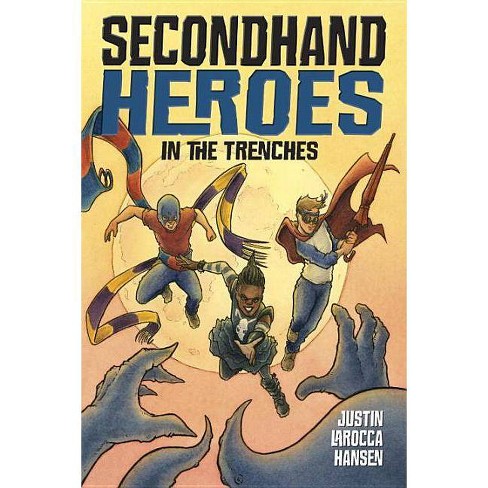 "In their second adventure, brothers Tuck and Hudson become their superhero alteregos, Stretch and Brella, to fight the evil Trench right in their own neighborhood"--

Fans of Amulet, Zita the Spacegirl, and Hilo will love this second volume in the Secondhand Heroes graphic novel series. Two ordinary objects turned a pair of brothers into superheroes. Now they must fight the evil Trench right in their own neighborhood. When Tuck and Hudson return from their first adventure as the superheroes Stretch and Brella, they're still reeling from the shock of their newfound powers. But there's no time to slow down. Trench, a supervillain whose powers came from the very same garage sale where Tuck and Hudson found their magic scarves and umbrella, lives around the corner--and he's out to get the brother superhero duo. With help from their squirrel companion, Steen, and another newly minted superhero, a neighborhood girl named Elvira, the brothers keep fighting the good fight, with plenty of action and adventure along the way.

Praise for In the Trenches * "Full of brotherly love, funny sidekicks, and a story that is all action, this graphic novel will win over all sorts of middle school readers." --School Library Connection, starred review "The tale careens toward a cliff-hanger ending. . . . Visuals nimbly capture the fight sequences and cast the emotional moments in an appropriately warm glow or raging heat, all in soft lines and a muted palette that help this series' aesthetic stand out in a crowded field." --Booklist The heroes may be secondhand, but the story is quickly becoming first-rate. --Kirkus Magnificently detailed. . . . Hand it those ready for some serious storytelling. --School Library Journal

Justin LaRocca Hansen was raised in a small town in Massachusetts, spending his summers in Cape Cod. He has loved comics, drawing, and watercolor since he was very young, and his childhood adventures continue to inspire his storytelling today. After receiving his artistic and undergraduate training at the Ringling College of Art and Design in Florida, Justin began teaching in New York and Massachusetts. He is the author/illustrator of Monster Hunter and currently resides in Brooklyn, New York.
If the item details above aren’t accurate or complete, we want to know about it. Report incorrect product info.