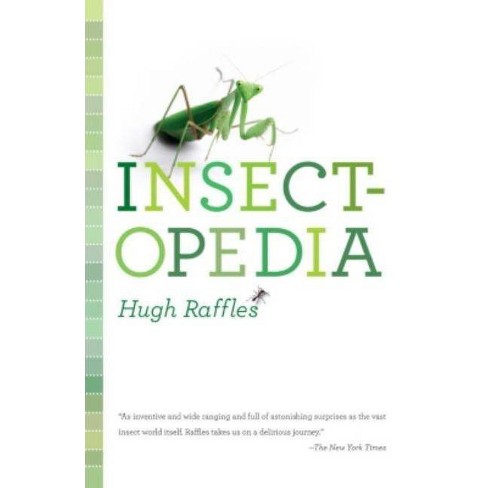 Deftly combining the anecdotal and the scientific, Raffles offers a stunningly original exploration of the beautiful, ancient, successful, astoundingly accomplished, largely unknown, and unfathomably different insect species with which we share this world.

A stunningly original exploration of the ties that bind us to the beautiful, ancient, astoundingly accomplished, largely unknown, and unfathomably different species with whom we share the world. For as long as humans have existed, insects have been our constant companions. Yet we hardly know them, not even the ones we're closest to: those that eat our food, share our beds, and live in our homes. Organizing his book alphabetically, Hugh Raffles weaves together brief vignettes, meditations, and extended essays, taking the reader on a mesmerizing exploration of history and science, anthropology and travel, economics, philosophy, and popular culture. Insectopedia shows us how insects have triggered our obsessions, stirred our passions, and beguiled our imaginations.

"A collection of imaginative forays into what, for most readers, will be terra incognita. . . . Insectopedia qualifies as food for thought. . . . As inventive and wide ranging and full of astonishing surprises as the vast insect world itself. Raffles takes us on a delirious journey."
--The New York Times

"Impossible to categorize, wildly stimulating. . . . A disconcerting, fantastical, (multi-)eye-opening journey into another existence."
--The New York Times Book Review "Vivid and fascinating. . . . This book will challenge your view of insects and make you see these wonderful creatures from a new perspective."
--New Scientist "As Raffles shows our nearby neighbors to be at once dangerous and beautiful, common and incomprehensible, he refracts a world that is newly fascinating."
--Audubon Magazine (Editors' Choice) "[A] big, beautiful testament to the glory of paying attention."
--The Boston Globe "The coolest, most beautifully written book on bugs imaginable."
--San Francisco Chronicle "Sings with scholarship, deft writing, and an authentic fascination with the six-legged creatures that have so long roamed the Earth."
--Seed Magazine "Combines elements of science, history, travel and popular culture to form a sparkling whole, a wide-ranging and idiosyncratic survey of a world we all too often scorn or swat. . . . [Raffles] reminds us of the connections among all creatures, of the unfathomable mysteries that separate us, and of the fragility and resilience of life."
--The Providence Journal "A revelation of the world of our fellow creatures . . . by a writer whose style is equal to his huge and strange task."
--Buffalo News (Editor's Choice) "Unusual and most engaging."
--The Seattle Times "Provocative. . . . Insectopedia opens up a can of worms and it's doubtful they can be herded back in."
--Santa Cruz Sentinel "Lucid and often beautifully constructed prose. . . . We can't recommend it highly enough."
--Austin Chronicle "The most readable book ever written about insects."
--The Stranger "Gorgeous, fascinating, and thought-provoking. . . . A stunning, sensitively written, insightful book. . . . Raffles set out to write a book about how people learn something new about themselves through relationships with insects, and he succeeded admirably."
--Bookslut

Hugh Raffles teaches anthropology at The New School. He is the author of In Amazonia: A Natural History, which received the Victor Turner Prize in Ethnographic Writing. His essays have appeared in Best American Essays, Granta, and Orion. Insectopedia is the recipient of a Special Award for Extending Ethnographic Understanding from the Society for Humanistic Anthropology. In 2009, he received a Whiting Writers' Award. He lives in New York City.

Visit the author's website at: www.insectopedia.org.
If the item details above aren’t accurate or complete, we want to know about it. Report incorrect product info.