Inside Hbo's Game of Thrones - by Bryan Cogman (Hardcover) 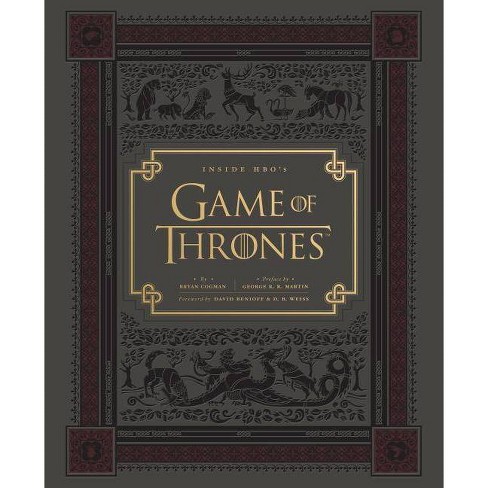 HBO's "Game of Thrones" reigns as cable's highest-rated series. This official companion book gives fans new ways to discover more about the beloved (and reviled) characters and the electrifying plotlines with hundreds of set photos, production notes, and more.

HBO's Game of Thrones reigns as cable's highest-rated series. This official companion book gives fans new ways to enter this fictional world and discover more about the beloved (and reviled) characters and the electrifying plotlines. Hundreds of set photos, production and costume designs, storyboards, and insider stories reveal how the show's creators translated George R. R. Martin's best-selling fantasy series into the world of Westeros. Featuring interviews with key actors and crew members that capture the best scripted and unscripted moments from the first two seasons, as well as a preface by George R. R. Martin, this special volume, bound in a lavishly debossed padded cover, offers exclusive access to this unprecedented television series.

For anyone yet to read Martin's novels, the book is a godsend. For all its epic brilliance, Game Of Thrones' multiple complex story threads can leave you befuddled, but thanks to profiles of the major characters, family trees and more, you soon know how to tell a Greyjoy from a Tyrell. The book's also a solid 'Making Of'. Author Bryan Cogman (a story editor on the series) has interviewed the show's key creative forces, and between them they reveal the attention to detail that's gone into realising the Seven Kingdoms. Particular focus is given to pivotal scenes like the storming of King's Landing, and it's here - when things get properly geeky - that the book's at its best.
-SFX

For the most part, people who watch and adore HBO's adaptation of author George R.R. Martin's Game of Thrones saga (released in book form via the A Song of Fire and Ice series) do so largely, though still pleasantly, in the dark. Give any random viewer a pop quiz with questions about which character belongs to which family, and how to spell characters' names, and the grades would be sub-par at best. Thankfully, the dense story lines are much easier to sift through and grasp thanks to Inside HBO's Game of Thrones. Combining in-depth cast and crew interviews with Martin's own insight, it's 192 pages of Westeros overload, perfect for a few months of catching up and/or refreshing before the show returns for its third season
Complex.com

Bryan Cogman is executive story editor on Game of Thrones and has written two episodes of the series. When not in Belfast shooting the show, he lives with his wife and daughter in Los Angeles. George R. R. Martin is an award-winning writer of books and screenplays, including the bestselling fantasy series A Song of Ice and Fire. He lives in Santa Fe, New Mexico, with his wife. David Benioff's latest novel is City of Thieves. He is co-creator and executive producer of the Emmy-nominated HBO series Game of Thrones. He lives in Los Angeles, California, with his wife and two daughters. D. B. Weiss is the author of Lucky Wander Boy, and has worked on numerous film projects such as Halo, Ender's Game, and The Game. Dan co-created and is an executive producer of the Emmy-nominated Game of Thrones for HBO. He lives in Los Angeles with his wife and two sons.
If the item details above aren’t accurate or complete, we want to know about it. Report incorrect product info.