Inside Studio 54 - by Mark Fleischman (Hardcover) 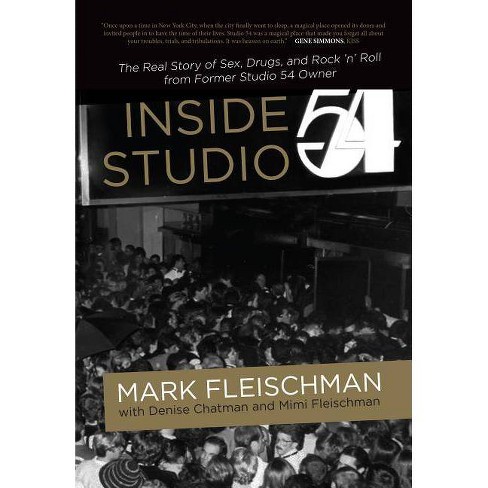 "Inside Studio 54 is chock-full of less-than-sober adventures, stunning celebrity accounts, and illustrates an atmosphere too prestigious to ignore, too wild to sustain and ultimately, too over-the-top to believe..."
--﻿Soul Tracks "This unfettered tell-all will prove nostalgic for those who manage to remember being there and engrossing for readers wishing they were."
--Kirkus Reviews "Once upon a time in New York City, when the city finally went to sleep, a magical place opened it's doors and invited people in to have the time of their lives. Studio 54 was a magical place that made you forget all about your troubles, trials and tribulations. It was Heaven on Earth."
--Gene Simmons, Bass player for KISS "In Inside Studio 54, the former owner takes you behind the scenes of the most famous nightclub in the world, through the crowd to a place where celebrities, friends, and the beautiful people sip champagne and share lines of cocaine using rolled up hundred dollar bills. Mark Fleischman reopened Studio 54 in 1981, after it was closed down by the State of New York. Ten thousand people showed up that night, ready to restart the party that abruptly ended after the raid in 1978, landing Steve Rubell and Ian Schrager, the former owners, in jail. Mark takes you on a star studded thrill ride through the decadent and drug fueled parties at the legendary Studio 54."
--Robin Leach, Las Vegas Review Journal, former host of Lifestyles of the Rich and Famous "Inside Studio 54 takes you to all my favorite spots inside. I spent so much time snorting cocaine in the women's toilet's of Studio 54 that they became known as my office."
--Nile Rodgers, Legendary record producer, songwriter, and guitarist for Chic "This is a great bathroom read lots of good shit."
--Tom Moulton, record producer of Gloria Gaynor, Grace Jones, and many more "As the original cowboy in Village People, I performed at Studio 54 often and when we would do YMCA, the crowd always went wild. This book truly captures the unique spirit and amazing, sensual energy that was Studio 54."
--Randy Jones, original Cowboy in the Village People "An amazing story of all the free-spirited excess of my generation, which also launched joyous Freestyle Skiing, the Olympic Reform and Title IX, thanks to Mark Fleischman believing in women like me."
--"Suzy Chapstick" Chaffee, Olympian and Captain of the U.S. Olympic Ski Team "Mark Fleischman has compelling tales to tell and doesn't hold back. This book will introduce you to the strong characters who peopled Nightworld and looks unflinchingly at the drug culture it engendered."
--Anthony Haden-Guest, author of The Last Party: Studio 54, Disco and the Culture of the Night, as well as articles in New York, London Sunday Times Magazine, Vanity Fair, and many other venues "Now, as then, [Fleischman is] an eager, garrulous host, gleefully sharing his love of the place, and the time, and the drugs"
--NPR
If the item details above aren’t accurate or complete, we want to know about it. Report incorrect product info.