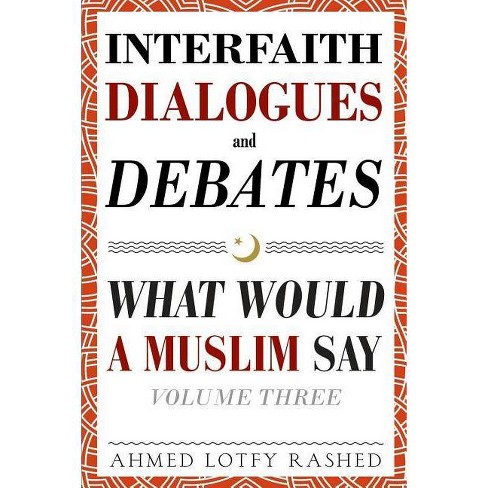 Why These Books are SPECIAL

What Would a Muslim Say is a series of books documenting my experiences as an interfaith volunteer. Since 2009, I have facilitated dialogue with many different people, answering questions about Islam and addressing misconceptions. This is the third book in the series, covering a variety of conversations from 2011 to 2016. My hope is that this can be a small step towards better understanding and harmony.

The conversations in these books are real. Since the focus of this volume is interfaith dialogue; only conversations with self-identified Christians have been included. Some are ecumenical and sympathetic, some are evangelical and confrontational, and some are simply curious. In this book, you will learn about:

Why These Books Matter NOW

You can find more samples of the author's work --plus free presentations, lecture notes, and resource guides-- at www.WhatWouldAMuslimSay.net

Ahmed Lotfy Rashed was born in Egypt and raised in Maryland. He studied physics at the University of Maryland Baltimore County. While there, he was on the Speakers Bureau for the Muslim Students' Association. He continued his education in Pennsylvania, earning his Masters' Degree at Bryn Mawr College. You can learn more at: www.WhatWouldAMuslimSay.net During his three years of graduate study, he served as Public Relations Officer for the Muslim Students' Association. It was at this time that Ahmed started talking about Islam at various churches, temples, and schools. He became known for his informal and approachable demeanor. His ability to break down complex religious and historical contexts for audiences earned him high reviews. He also taught math and science at the local Islamic School. In addition, he led the Youth Committee of the local mosque in Villanova. Soon after graduating, he married and found employment in Boston as a research engineer. Since coming to Boston in 2004, he has been an active volunteer at several mosques in the Greater Boston Area. He has been the head instructor for the local Islam101 class since 2006. Also, he has been a volunteer for WhyIslam.org since 2009. He has presented Islam at schools and churches, and he has hosted visits to several major mosques in the area. Ahmed continues to work and live in the Greater Boston Area with his wife and three children. In his spare time, he likes to read about comparative religions, Islamic law, Islamic history, and military history. He also has a weakness for fantasy and science-fiction novels - a problem of which his wife is still trying very hard to cure him.
If the item details above aren’t accurate or complete, we want to know about it. Report incorrect product info.