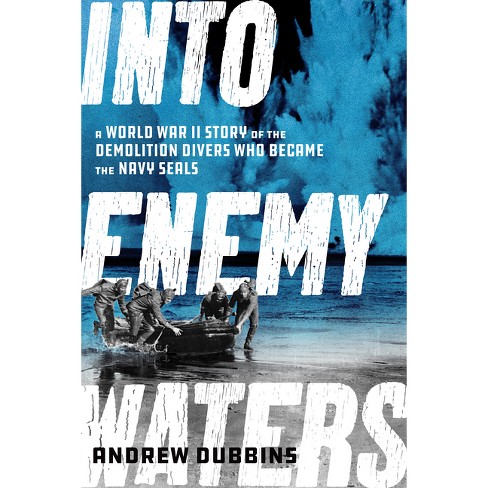 Dubbins chronicles the story of the pioneering Underwater Demolition Teams (UDT) and George Morgan, one of its last surviving members, as they cleared a path for Allied invasion forces and helped win World War II.

With echoes of Unbroken; the derring-do and bravado of The Right Stuff; and the battle-forged camaraderie of Band of Brothers, this is the World War II story of 95-year-old veteran George Morgan and the Underwater Demolition Teams. Forerunners of the Navy SEALs, the elite unit was given nearly impossible pre-invasion missions from D-Day to the most crucial landings in the Pacific Theater.

Into Enemy Waters details the origins and heroic missions of World War II's most elite and daring unit of warriors, told through the eyes of one of its last living members, 95-year-old George Morgan.

Morgan was just a wiry, 17-year-old lifeguard from New Jersey when he joined the Navy's new combat demolition unit, tasked to blow up enemy coastal defenses ahead of landings by Allied forces. His first assignment: Omaha Beach on D-Day.

When he returned stateside, Morgan learned that his service was only beginning. Outfitted with swim trunks, a dive mask, and fins, he was sent to Hawaii and then on to deployments in the Pacific as a member of the elite and pioneering Underwater Demolition Teams. GIs called them "half fish, half nuts." Today, we call them frogmen--and Navy SEALS.

Led by maverick Naval Reserve Officer Draper Kauffman, Morgan would spend the fierce final year of the war swimming up to enemy controlled beaches to gather intel and detonate underwater barriers. He'd have to master the sea, muster superhuman grit, and overcome the demons of Omaha Beach.

Moving closer to Japan, the enemy's island defenses were growing more elaborate and its soldiers more fanatical. From the black sand beaches of Iwo Jima to the shark infested reefs of Okinawa, to the cold seas of Tokyo Bay, teenaged George Morgan was there before most, fighting for his life. And for all of us.

"Exhaustively researched and written in a lively, gripping manner, this history deserves to be on the bookshelf of anyone who admires courage or who has donned a face mask and looked below the surface of any sea." --Bing West, author of The Last Platoon, Marine combat Veteran, and former Assistant Secretary of Defense for International Security Affairs "A remarkably stirring narrative that transports readers into the gritty realities of surviving WWII. Andrew Dubbins' Into Enemy Waters is more than just a great retelling of the history of early combat swimmers and Frogmen. This well-researched book is both visceral and uplifting, telling of a time of great courage, integrity and camaraderie. These are not your Hollywood Navy Seals. They are real men that sacrificed their youth and innocence for the greater good." --Jill Heinerth,  author of Into The Planet: My Life as a Cave Diver "The harrowing combat experiences of George Morgan and his pioneering comrades of the World War II U.S. Navy's combat demolition units come to life in this well-researched, intimate history. Andrew Dubbins tells their story with authoritative empathy and much verve." --John C. McManus, Ph.D., Curators' Distinguished Professor of History, Missouri S&T, and author of Island Infernos: The U.S. Army's Pacific War Odyssey, 1944 "Today's SEALs are a highly effective, versatile, and lethal force, but they stand on the shoulders of these heroic WWII frogmen.  This book must be included in the canon of histories about our nation's special operations forces.  Andrew Dubbins meticulously and faithfully takes the reader from Ft. Pierce to Omaha Beach to the bloody amphibious invasions of the Pacific to recount the story of the Navy's fabled Underwater Demolition Teams.  May their memory never fade."   --Captain Michael V. Goshgarian, USN (ret.), Naval Special Warfare 1989-2016 "An authentic, vigorously reported and told story of the men in both the Atlantic and Pacific Theaters whose literally explosive exploits became the envy of and inspiration for the Navy SEALS. Thank goodness the 'demolition divers' are finally getting their due, and in such riveting detail." --Tom Clavin, New York Times bestselling coauthor of Halsey's Typhoon: The True Story of a Fighting Admiral, an Epic Storm and an Untold Rescue; and Lightning Down "This is a gripping, heart-racing, nail-biting masterpiece. It tells the story of George Morgan, his commander and fellow frogmen on an underwater demolition team that evolved into the Navy SEALS. Join them at Normandy, where, faces gray with fear, they swim through searing gunfire, shrieking shells and moaning men to blast apart Nazi barriers; then join them in the Pacific, where, during the bloodiest invasions of World War II, they map the ocean floor at Iwo Jima for U.S. warships and swim onto the shores of Japan itself. These are their personal stories, exhaustively reported by a master of elegantly layered styling, who has written a book about rare and breathtaking courage. It will hold you deeply into the night, and you will be glad that it did." --Richard E. Meyer, senior editor at UCLA Blueprint magazine and two-time Pulitzer finalist "A superior piece of narrative military history, offering intimate profiles of the young men called upon to perform some of the most dangerous feats of World War Two that proved critical to pivotal battles on both fronts. Andrew Dubbins has succeeded in portraying a fully human portrait of these men, who were both vulnerable to the horror of war and somehow able to survive it."   --McKay Jenkins, author of The Last Ridge: The Epic Story of America's First Mountain Soldiers and the Assault on Hitler's Europe  "Gripping and intensely moving, Into Enemy Waters is a timely reminder that war leaves none of its participants unaffected. Andrew Dubbins has honored the memory of those who gave their lives and announced himself as a major new talent in narrative nonfiction."  --Saul David, author of Crucible of Hell: The Heroism and Tragedy of Okinawa, 1945 "A tale of breathtaking and breath-holding daring. This is D-Day and the Pacific Theater as you've never witnessed it before--through the eyes of the frogmen who reconnoitered the murky, mine-filled waters and hostile shores for allied landings. Into Enemy Waters reminds us of the meaning of true sacrifice and courage."  --Buddy Levy,  award-winning and bestselling author of Labyrinth of Ice: The Triumphant and Tragic Greely Polar Expedition and River of Darkness  "This book is a rollicking tale of warfare from a different time, when America's elite units were cobbled together on short notice and manned with skinny teenagers who had every reason to expect they would get killed in battle. It is a story of noble intentions but also terrible desperation. Andrew Dubbins elegantly weaves personal stories through the grand historical narrative, while offering a compelling backstory about the hardscrabble origins of a legendary special operations force." --Graeme Smith, author of The Dogs Are Eating Them Now: Our War In Afghanistan "As their numbers decline, it is essential to preserve the memories of the veterans of WW II.  Andrew Dubbins has done this in this excellent book, describing the tragic horror of that war while writing of the daily acts of courage of those who served. From Normandy to Iwo Jima, his account of the courageous Underwater Demolition Teams, the famed US Navy 'Frogmen, ' is powerful. But in Dubbins' sensitive telling, it is also so very personal and human. A moving story well told." --James Wright, President Emeritus of Dartmouth College, historian and Marine Corps veteran, and author of War and American Life:  Reflections on Those Who Serve and Sacrifice


"Journalist Dubbins delivers a rousing history of the U.S.
Naval Combat Demolition Units...He
creates a vivid and fast-moving narrative of courage and sacrifice under the
most extreme conditions. WWII buffs will be thrilled." --Publishers Weekly

"The carefully researched book takes readers into pivotal
world events such as the landing on Omaha Beach, the bombing of Pearl harbor,
and the atomic bomb's first use. The narrative is gritty and personal and nothing
like a Hollywood version of the Navy Seals. Readers will enjoy the visceral and
detailed writing that illuminates the uncomfortable nature of war and the
maturity of teenagers who ultimately saved the world from fascism." --DIVER magazine
If the item details above aren’t accurate or complete, we want to know about it.

The Price of Principle - by Alan Dershowitz (Hardcover)

The Return - by Dick Morris (Hardcover)

The Enemy at Home - by Kevin O'Brien (Paperback)