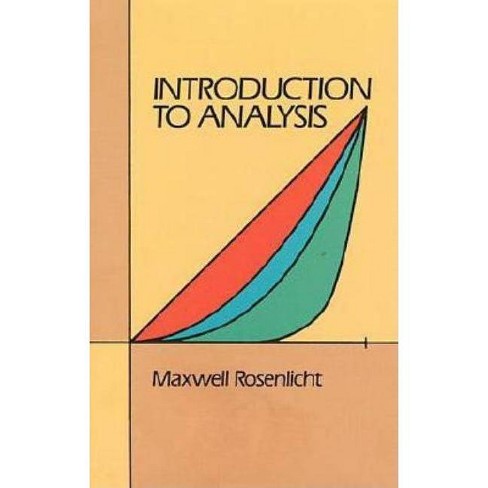 This well-written text provides excellent instruction in basic real analysis, giving a solid foundation for direct entry into advanced work in such fields as complex analysis, differential equations, integration theory, and general topology. The nominal prerequisite is a year of calculus, but actually nothing is assumed other than the axioms of the real number system. Because of its clarity, simplicity of exposition, and stress on easier examples, this material is accessible to a wide range of students, of both mathematics and other fields.
Chapter headings include notions from set theory, the real number system, metric spaces, continuous functions, differentiation, Riemann integration, interchange of limit operations, the method of successive approximations, partial differentiation, and multiple integrals.
Following some introductory material on very basic set theory and the deduction of the most important properties of the real number system from its axioms, Professor Rosenlicht gets to the heart of the book: a rigorous and carefully presented discussion of metric spaces and continuous functions, including such topics as open and closed sets, limits and continuity, and convergent sequence of points and of functions. Subsequent chapters cover smoothly and efficiently the relevant aspects of elementary calculus together with several somewhat more advanced subjects, such as multivariable calculus and existence theorems. The exercises include both easy problems and more difficult ones, interesting examples and counter examples, and a number of more advanced results.
Introduction to Analysis lends itself to a one- or two-quarter or one-semester course at the undergraduate level. It grew out of a course given at Berkeley since 1960. Refinement through extensive classroom use and the author's pedagogical experience and expertise make it an unusually accessible introductory text.
If the item details above aren’t accurate or complete, we want to know about it. Report incorrect product info.