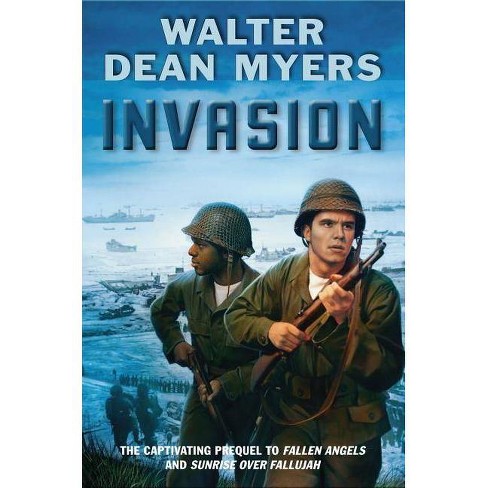 "When Josiah "Woody" Wedgwood enlists in the army, he is immediately sent to England to prepare for the Normandy invasion, harboring only vague ideas about the nature of war. But when he lands on the beach in France, the reality of battle hits him. "We are at the water's edge. A soldier runs past us onto the sand. Suddenly he falls to his knees and clutches his belly. As his body bends forward, I see the bullets rip into his bowed back. We move away from him. Move away from the terrible bullets." Facing terror, Woody questions what he's doing, makes desperate pleas to God, and worries about when and where to go to the bathroom. The brutal battle scenes and wartime musings are vividly told. But there's also a sense of the times, such as the naive feelings Woody has for a girl back home or the racist and xenophobic attitudes among his fellow soldiers in the 29th Infantry Division. These Myers delivers, along with his themes, subtly through Woody's matter-of-fact observations as his ragged battalion fights its way through Normandy. Woody, who is white, volunteered with hometown acquaintance (and important wartime friend) Marcus Perry, Robin Perry's grandfather in Sunrise over Fallujah (rev. 5/08) and Richard Perry's uncle in Fallen Angels (rev. 7/88). Marcus, a black soldier, faces grave danger driving a truck but doesn't participate in direct combat (although the book jacket art seems to belie this fact); in 1944, troops were segregated and menial jobs frequently relegated to black soldiers. And this was the Good War." - Betty Carter, Hornbook Magazine starred review