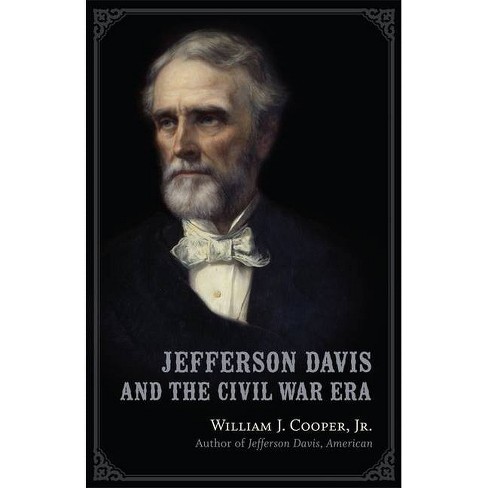 $20.99
no reviews yet
be the first!be the first! ratings
Shipping
Free standard shipping with RedCard
Loading, please wait...
Help us improve this page

In his masterpiece, Jefferson Davis, American, William J. Cooper, Jr., crafted a sweeping, definitive biography and established himself as the foremost scholar on the intriguing Confederate president. Cooper narrows his focus considerably in Jefferson Davis and the Civil War Era, training his expert eye specifically on Davis's participation in and influence on events central to the American Civil War. Nine self-contained essays address how Davis reacted to and dealt with a variety of issues that were key to the coming of the war, the war itself, or in memorializing the war, sharply illuminating Davis's role during those turbulent years.
Cooper opens with an analysis of Davis as an antebellum politician, challenging the standard view of Davis as either a dogmatic priest of principle or an inept bureaucrat. Next, he looks closely at Davis's complex association with secession, which included, surprisingly, a profound devotion to the Union. Six studies explore Davis and the Confederate experience, with topics including states' rights, the politics of command and strategic decisions, Davis in the role of war leader, the war in the West, and the meaning of the war. The final essay compares and contrasts Davis's first inauguration in Montgomery, Alabama, in 1861 with a little-known dedication of a monument to Confederate soldiers in the same city twenty-five years later. In 1886, Davis -- an old man of seventy-eight and in poor health -- had himself become a living monument, Cooper explains, and was an essential element in the formation of the Lost Cause ideology.
Cooper's succinct interpretations provide straightforward, compact, and deceptively deep new approaches to understanding Davis during the most critical time in his life. Certain to stimulate further thought and spark debate, Jefferson Davis and the Civil War Era offers rare insight into one of American history's most complicated and provocative figures.