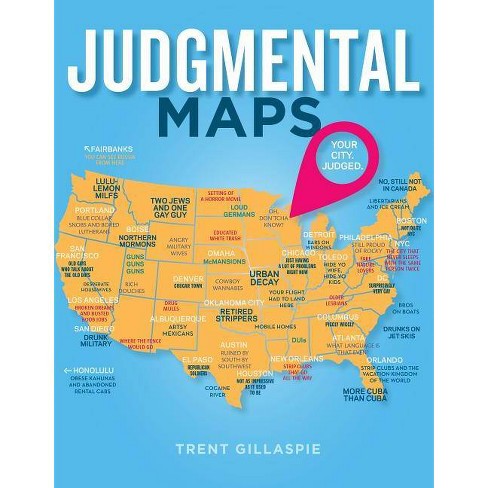 A sharp tongued and fierce witted full-color collection of maps of America's greatest cities in all their brutally honest glory.

When you move to a new city you look at a map to get you where you need to be, but a Google Map of San Francisco won't tell you where you can get "Real Dim Sum" or where "The Worst Trader Joes Ever" is. Or if you're visiting Chicago, you might want to see the Magnificent Mile, but not know it's right next to where "Suburbanites Buy Drugs" and "Retired Mafioso." This is where Judgmental Maps comes in - a no holds barred look at city life that is at once a love letter and hate mail from the very people who live there.

What started as a joke between comedian Trent Gillaspie and his friends in Denver, quickly grew into a viral sensation with a rabid and enthusiastic community labeling maps of their cities with names and descriptions we all think of, but are a bit too shy to say out loud. Collected here in a full color, beautifully packaged book with all new, never before published material, Judgmental Maps is laugh out loud funny from New York to Los Angeles, Minneapolis to Atlanta and offending everyone else in between.

Trent Gillaspie is a comedian, a technology product manager, a graphic designer by hobby, and a self-proclaimed cartography nerd living in Austin, Texas. His JudgmentalMaps.com blog has been featured in The Huffington Post, Business Insider, Complex Magazine, Someecards, The Atlantic's CityLab and was named one of Tumblr's Top Trending Blogs of 2014. He is a firm believer that running through a city is a nice way to discover all of its best-hidden secrets. He has a goal of one day buying a house in Denver's "People's Bosses" neighborhood, and he is on a quest to visit all 50 states. At the time of publication, his state count is at 47, and he asks, "Is West Virginia really worth it?"
If the item details above aren’t accurate or complete, we want to know about it. Report incorrect product info.