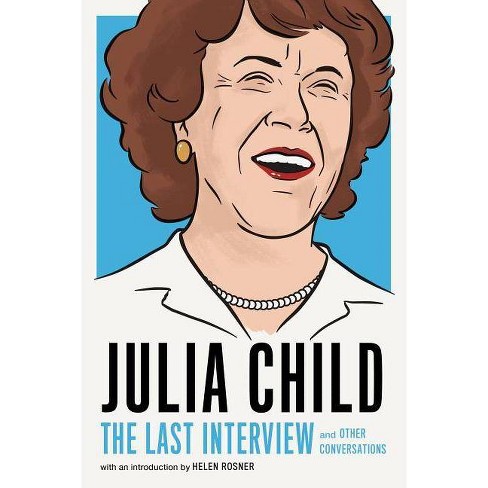 A delightful collection of interviews with the beloved Julia Child--The French Chef, author, and television personality who revolutionized home cooking in 20th century America This delightful collection of interviews with The French Chef Julia Child traces her life from her first stab at a writing career fresh out of college; to D.C., Sri Lanka, and Kunming where she worked for the Office of Strategic Services (now the CIA); to Paris where she and her husband Paul, then a member of the State Department, lived after World War II, and where Child attended the famous cooking school Le Cordon Bleu. From there, Child catapulted to fame--first with the publication of Mastering the Art of French Cooking in 1961 and the launch of her home cooking show, The French Chef in 1963. In this volume of carefully selected interviews, Child's charm, guile, and no-nonsense advice are on full, irresistibly delicious display. Includes an Introduction from Helen Rosner, food critic for the New Yorker.

Julia Child was born in Pasadena, California, in 1912. After attending Smith College, she joined the Office of Strategic Services (now the Central Intelligence Agency) where she facilitated top-secret communications between U.S. government officials and intelligence officers during World War II. While stationed in Sri Lanka, she met fellow OSS employee Paul Child, and the two married after the war. In 1948, the couple moved to Paris, where Child attended the famous cooking school Le Cordon Bleu. Her first book, Mastering the Art of French Cooking was published in 1961, was an instant bestseller, and is now a revered classic. In 1962, she launched the first live cooking show, The French Chef. From the 1960s through the 1990s she starred in many television shows and published more than a dozen critically acclaimed book. She is widely recognized as one of the most influential figures in American cooking. She died of kidney failure in Montecito, California, in 2004. Helen Rosner is a food critic for the New Yorker.
If the item details above aren’t accurate or complete, we want to know about it. Report incorrect product info.