Keeping Those Words in Mind - by Max Louwerse (Hardcover) 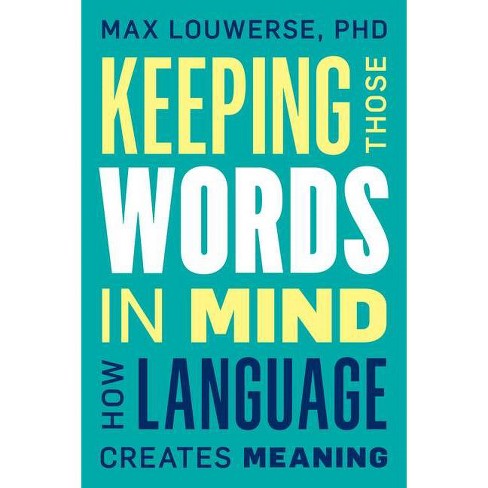 "By examining how our brains process language and find patterns, the intricacies of the language system itself, and even scientific breakthroughs in computer science and artificial intelligence, Keeping Those Words in Mind brings a brand new and interdisciplinary explanation for our ability to extract meaning from language"--

How can humans keep thousands of words in mind and have no difficulty understanding trillions of sentences? The answer to this question might lie in parents teaching their children language skills, or in in the human brain, which may be equipped with a language instinct or maybe in impressive memory skills that link words to their perceptual information. Undoubtedly, there is some truth to some of these explanations. But one answer - perhaps the most important answer - has been largely ignored. Keeping Those Words in Mind tries to remedy this oversight. Linguist and cognitive psychologist Max Louwerse, PhD. argues that understanding language is not just possible because of memory, brains, environment and computation, but because of the patterns in the sequence of sounds and words themselves.He demonstrates that what seems to be an arbitrary communication system, with arbitrary characters and sounds that become words, and arbitrary meanings for those words, actually is a well-organized system that has evolved over tens of thousands of years to make communication as efficient as it is. What is needed for humans to acquire language, is for humans to recognize and discover the patterns in our communication system. By examining how our brains process language and find patterns, the intricacies of the language system itself, and even scientific breakthroughs in computer science and artificial intelligence, Keeping Those Words in Mind brings a brand new and interdisciplinary explanation for our ability to extract meaning from language.

"A delightful tour of our amazing collective ability to spin the web of language. Sparkles with insights, striking metaphors, and wonderful examples of how language is both utterly familiar and full of mysteries." -Nick Chater, Professor of Behavioral Science at the University of Warwick and the author of The Mind is Flat: The Remarkable Shallowness of the Improvising Brain

"If you have ever marveled at the complexity of language, you might also have wondered how brains learn to use it. Many approaches to this question assume mechanisms that enable us to invent language for ourselves. In Keeping Those Words in Mind, Max Louwerse provides a fascinating and accessible alternative. Each of us grows up in an environment in which language is already present, and the social reality of language and its use greatly eases the problem of learning it. Not only will this book change the way you think about language, but it will bring you new insights into how you think in general." -Art Markman, Professor of Psychology at the University of Texas and author of Smart Thinking and Bring Your Brain to Work

"In Keeping Those Words in Mind, Louwerse's prose is simultaneously captivating, accessible, and even suspenseful. While getting just deep enough into the weeds to satisfy a scientist and still keep a non-scientist engaged, Louwerse has written a masterpiece that touches on all of the key debates in the sciences of language. His ability to bring the reader into a new perspective on how language works has the potential to change the way everybody thinks about how and why our words mean what we think they mean. Louwerse shows us that, while humanity is constantly redesigning language, language is in turn constantly redesigning humanity." --Michael J. Spivey, Ph.D., Professor of Cognitive & Information Sciences at the University of California, Merced and the author of Who You Are and The Continuity of Mind

Max Louwerse is a linguist, cognitive psychologist, and artificial intelligence researcher. He worked at universities in the United States and the United Kingdom and currently is Professor of Cognitive Psychology and Artificial Intelligence at Tilburg University, the Netherlands. Louwerse published in many different outlets answering research questions including how computers extract meaning from language, how human brains process language, how to build conversational virtual humans, and how virtual reality and artificial intelligence can change the future of education. Louwerse has set up and led several initiatives to bring academic research to society, the general public, and industry. For more information about Louwerse's work, visit MaxLouwerse.com.
If the item details above aren’t accurate or complete, we want to know about it.

Languages Are Everywhere - (Words in My World) by Nandi Sims

100 First Words about Food: A Carry Along Book - (Carry-Along Books) (Board Book)

Language Varies - (Words in My World) by Nandi Sims

Language in Society - (Words in My World) by Nandi Sims